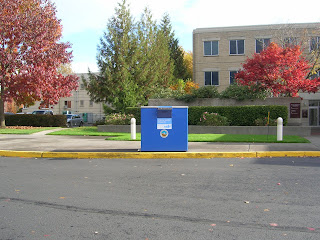 Good: Took the lightrail to work yesterday
Better: Which meant that I got some extra exercise, i.e. 50 minutes of brisk walking
Bad: Along the route I saw that several people had already put up Christmas lights. Resist the urge, people! Put up Veteran's Day lights, or Remembrance Day lights, or Thanksgiving lights. Show some restraint already.

Smug Fact du jour: Above is a picture of the line I had to wait in to drop off my ballot yesterday.

Giveaway du jour: Today I will give time. I will listen on the phone while my mother bemoans the fact that the country is going down the sewer because the Wrong Person Won. And I won't play bubbleshooter while she's complaining.
Actually, she wasn't too bad. Though I was shocked to hear about the way people in the neighborhood reacted to her views. Yes, she's a conservative living in a deeply liberal enclave, but she does have the right to her views.
Someone slipped an anonymous note in the mailbox about 'how amused' they were to walk by her house and see her campaign sign in the window. She used to have them on the lawn, but people kept stealing them (though not her liberal neighbor's signs). Clearly, since they were frustrated about not being able to take away her opinion, they decided to share their contempt with her instead. For Heaven's Sake, people, get a life! Let someone have a minority opinion! We don't have to agree with her.

Exercise du jour: Bell, ball, and balance (Kettlebell and balance ball)
Again, left the evilSUV at home and walked/took the lightrail to work. Plus, I worked in a 20 minute brisk walk at lunch, so that give me a total of 60 minutes brisk walking. (Nothing like walking in a light rain on a chilly night to ensure a brisk walk.)
Posted by The Merry at 11/05/2008 03:44:00 AM

You are a saint. Thankfully, my immediate family and I are all of the same political persuasion so it's all good in the hood. :)