I did enough whining yesterday to suffice for the week.

Tomorrow I will start to snap at anyone who suggests I rewrite that @#!$ manual One More Time. I've got people snapping at me to finish up the Very Important Documentation for the Big Kahuna customer, and start the other V.I.D. that's due in a few weeks. No pressure, but get it done and done right.

The positive side of this is that I am becoming very assertive. This surely will allow me to carve out a bit of time for myself to exercise. I did remember to eat lunch today. I ate at my desk while typing, but still I count that as a positive step.

Tomorrow will be better.

I live for my work? When did THAT happen? 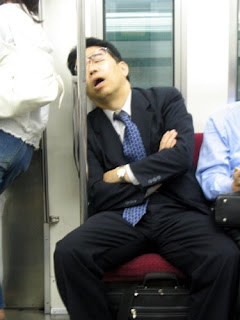 Photo courtesy of flickr
The last few weeks I kept saying, I'll just finish the first draft of this manual and then I'll catch up on my life.

Huh. And the ironic part is, I even believed it.

So today I finished the manual and sent the draft out for review. Usually that means in a couple of weeks someone sends back a sentence or two of comment. Bah. This project, I had three separate managers call me in for meetings. (Separately, naturally. God forbid they should work together on this project.) But after all the work I'd put in, I figured leaving half an hour early wouldn't hurt. (That's not as sybaritic as it might sound. If you've been working copious amounts of unpaid overtime, a little flexibility is understood.)

But no. Right before I was about to leave, I got an email from another manager on another project, demanding documentation on a project that hadn't even been tested yet. Which meant that I had to present as 'fact' information that was in reality something that could most accurately be described as 'in theory.'

Mind you, the manager in question left work early (right after sending the email) so I couldn't (metaphorically) slap him upside the head and ask what on earth he was thinking.

I want to get back to a regular routine of exercise and eating them damn green leafy things. I just don't want to go on unemployment to do it. Methinks this is one of those 'Mary, Get Assertive' moments that I keep being sent. Argh.

That's all, I just wanted to whine. Don't mind me. Back to your regularly scheduled... er... schedules.

I vowed that I would either exercise, die, or post the reason why.

(Okay, so I didn't really say "die" but I threw that in because it made the sentence more exciting. Drama, that's what the ratings need.)

Yesterday I did not exercise, so here's the why.

Inner Critic: Why didn't you exercise?

Inner Critic: And you have a treadmill indoors.

Me: And there wasn't any room to unfold the treadmill. 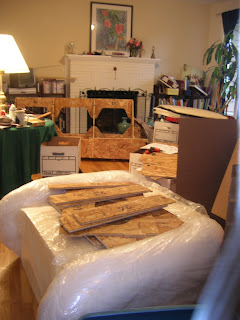 Inner Critic: Hmph. So fix it! Get your act couch together!

Today, I have good news, bad news, and ugly news.

Good: I've assembled the couch. Now I have room to set up the treadmill. 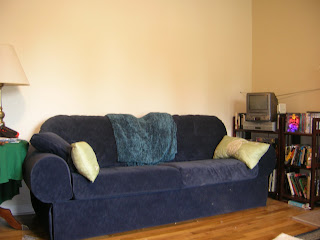 Bad: It took me hours to put the couch together, mostly because I felt so rotten I kept having to take a break to lie down.

Ugly: I just found a leftover screw. Where was that supposed to go?

Living in the shadow of 'almost' 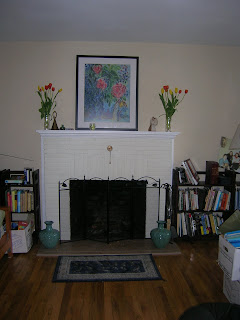 I spend my time almost ready to do something: lose weight, organize the house, start inviting people over, get back into long-distance cycling.

It's amazing how long I've been able to swallow the wishful-thinking pills. I always think if I just do a little-bit-more, then I can really start living.

It's easy to forget that living is what I'm doing right now. The only difference is that this is not the way I want to live.

So I've started inviting people over. Boxes? Oh, those are decorating choices. Yes, leaving boxes scattered around your living room is the latest look. Everyone does it, didn't you know? Martha's going to mention it in her magazine any month now.

Of course, since my futon/couch let me down – literally – I’m not so keen on inviting people over until I get a Proper Couch. Or sofa. Or davenport. Whatever. I'm working on that this weekend.

Henceforth, I will either
a) post stats about working out and eating those damn green leafy things
or
b) post the reason excuse why I failed to meet the goal for the day.

Even if this turns out to be a Thomas Edison sort of blog*, I can learn from my failures. Or celebrate my successes. Methinks posting progress or regress will help.