Goals for the week


Quote du jour: Of the blessings set before you, make your choice and be content.
- Samuel Johnson

Finally, finally, I finished the damn project.
Out of morbid curiosity, I went back and looked at what I'd blogged when I last worked on this project.

The last time, I wrote the following:

I need to change my behavior when chaos reigns around me. I tend to get resentful, which is natural but unhelpful. My work comes at the process, after a long line of other people's jobs, and if other people take longer than expected, the pressure is on me to complete the job on schedule even if that means working late hours and going short on sleep. Geez. I can't even describe it without resentment coming into the paragraph. That needs to change.

It's depressing to look back and see the cycle repeating itself time after time. Saying "that needs to change" is all very well, but what change to make? I need a plan.

Right now, of course, I need to de-stress to the point where I can make plans. The first goal is to unwind. I'm still steamed about stuff. I keep re-hashing arguments in my mind and re-living the stress -- why? Does it do any damn good? Of course not. I'm trying various ways to unwind:

Friday, I tried chocolate therapy, shopping therapy, pinot noir therapy, and early-to-bed therapy. I know I should've tried exercise therapy, but I was wound up so tightly that all I wanted to do was curl up in the fetal position and whimper, which does not lend itself to exercising.

Saturday, I tried elliptical therapy and weed-pulling therapy. Would've worked, too, if I hadn't had a couple cups of coffee. I was thinking it would give me energy to attack the weeds, but instead it just made me panicky.

Next week, I need to start figuring out how I can change the cycle.

Site du jour: Cammy, from the Tippy Toe Diet blog, has a post about how the New Improved Cammy deals with stress without derailing her balanced lifestyle

Four goals for the week:

Hate your job... there's a support group for that

see more funny videos, and check out our Yo Dawg lols!


The whole point of this blog was that I should document my fight with my inner slug and how I vanquished it to achieve my ultimate goal of Fitness and World Domination.* What it's turned into, this past month, is a battle between Me and the Evil Bosses At Work. And by "evil", I mean people who have different priorities than I have. (Doesn't sound as dramatic that way, but it's true. They're not evil. They are -- some of them -- not seeing the whole picture.)

I took the weekend off.

Yes, that's what I wrote. I did not work this weekend.

That makes two weekends in a row that I did not work -- after about 4 months of working every weekend. The last three weeks, I worked every night until about 10 p.m., trying to make an unreasonable deadline. Now that it's passed, and I've been publicly outed for having Held The Project Back, for some reason people have started thinking that this is a good moment to start throwing in every kitchen-sink improvement to the documentation that they can come up with -- but if that holds back making the deadline, why, that's the fault of the tech writer.

I think there comes a time, after working 12-15 hour days for several weeks, where you get cranky as all hell and start writing blog posts about how unfair life is. That doesn't really accomplish much in the way of a productive result. What I've decided to start doing is setting limits. I do not want to work more than 10 hours a day, and I do not want to work more than 2 weekends in a row. I want to do a good job, but if that means sacrificing every part of the rest of my life including sleep, then I think that the powers that be need to reconsider their project.

There. I said it.

Exercise du jour: Hell. If I get a 1-mile walk at lunch, I will call it a victory. And I will give myself a gold star. I like the idea of setting for myself a goal that I might actually reach.

Well, I managed half a mile. Still a semi-victory.


*Um... that is, domination of the world I inhabit. I tend to the belief that we all inhabit our own separate worlds, spheres that orbit the same general sun yet which hold some radically divergent life experiences. Oh crap, I'm getting metaphysical again, aren't I? Sorry. I try to refrain from that sort of thing in public.
Posted by The Merry at 6/20/2011 05:36:00 AM 7 comments:

Someday soon, I'm going to work out. Really. Honest. Would I lie? To you? Naaaaah.

I think I am coming to the end of the latest series of 15-hour work days. Regularly scheduled exercising, sleeping, and blogging will re-commence shortly. Probably.

There's a light at the end of the tunnel. 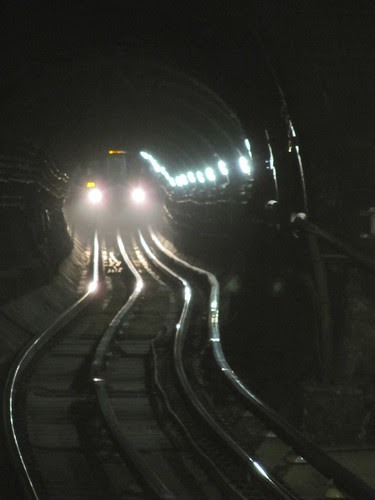 The list goes ever on and on
Down the notepad where it began
Now far and long the list has grown
And I must tackle it, if I can
Crossing tasks off with weary pen,
Until they join some larger list.
Some day I'll get an unlisted life.

Word du jour: Lassitude - the attitude Lassie gets after little Timmy falls down that damned well One More Time.

The trouble is that I've been feeling completely exhausted for days. I have no energy. Wake up tired, go to sleep tired. In between, feel exhausted. It's really stupid. I mean, if I were suffering from leprosy or schistosomiasis or something exotic and important-sounding, that would be one thing. But this? Bah.

Exercise du jour: Cycling. Maybe not the full 20, but at least part of it. Have to drop the evil SUV off at the mechanic, so at least I'll cycle from his place to the Max. I'll see how it goes.

Rewriting Shakespeare, and other do-overs

Quote du jour Take care of your body. It’s the only place you have to live.
– Jim Rohn

As part of my attempt to 'travel light', when I take the Max to work I carry only a small purse that holds a tiny notebook and a tiny pocket edition of Shakespeare. The whole set is about 20 volumes, which adds up to about four plays per tiny book. Sometimes the Bard is good, sometimes... not so much. I'm thinking of re-writing some of Shakespeare's plays. (He'd thank me, I'm sure.)
For example:

On the exercise front, I'm planning another do-over: I want to cycle 20 miles again. This time, instead of trying to scrunch most of the mileage into the afternoon, I want to cycle the whole way into work and then back again. See how the muscles feel about that. I figure splitting the commute up into two 10-mile rides should be easier. [Famous Last Words...]

One problem I have is that my mind still thinks 20 miles is a short distance to cycle, while my muscles are saying "Excuse me? You sit on the couch or at a desk most of the day -- why did you think you could just jump back into cycling?" The muscles have a point: I didn't bother to stretch Tuesday night, since it was "such a short distance." Wednesday, my hamstrings were so tight I couldn't touch my ankles. (Usually I can almost reach my palms to the ground.) This time, I'll take it easy.

Exercise du jour: 20 miles cycling. Okay, maybe not. It's a bad sign when you wake up exhausted. Maybe this is left-over flu or something. Today's a walking day.

Scenes from the Max

Maybe it's just me, but if I saw someone wearing headphones and with their head down, their eyes fixed on a book, my first thought would not be "Oh! There's a person who wants me to sit down and talk to them!"

The young guy on the Max train, however, thought otherwise. Full of a twitchy kind of energy, he cheerfully launched into a full flood of conversation; all that was required of me was that I sit there and listen.

Mostly, it was the kind of talk that's hard to argue with. He said things like "I hate rain. It makes everything wet. I much prefer sun or snow." Um.... yeah.
Then he switched over to talking about how he hated the legal system. "I mean, I got a notice to show up to court, but there are two courthouses within a few blocks of each other. How're you supposed to know which one to go to? So they said I didn't show up. It's so unfair." Didn't the notice include the address where you were supposed to go? "And cops. I hate cops. I mean, it's good that they're there if there's an emergency or something, but basically they're just all pigs." Um... would you even notice if I started reading my book again?
Thankfully, he got a phone call and got off a few stops later. He kept protesting to the caller "Well, if you tried to see it from my shoes, you'd understand..."

The ride home was much quieter. No one felt the need to tell me anything at all; I sat and listened to conversations on all sides. It felt very peaceful. The two guys across from me were talking about boat races they were involved in; one guy held a paddle and was dressed in sporting clothes like he just got off the river. I didn't think much of it until the time came for the paddle-holding man to get off the train. That was when he unfolded the long white cane and began tapping his way toward the doors.

I don't know why it surprised me that a blind man was involved in boat racing, but it did. It's good to overthrow your expectations from time to time.