The good psychic would pick up the phone before it rang. Of course it is possible there was no one on the other line. Once she said "God Bless you" I said, "I didn't sneeze" She looked deep into my eyes and said, "You will, eventually." And damn it if she wasn't right. Two days later I sneezed.
- Ellen Degeneres

Hmmn... maybe I should add psychic to my job search?

Site du jour: This link is to a vocabulary test. Think you know a lot of words? I thought I did, but some of these had me stumped.

Go and find Jesus when your patience and strength give out and you feel alone and helpless. He is waiting for you in the chapel. Say to him, "Jesus, you know exactly what is going on. You are all I have and you know all. Come to my help." And then go and don't worry about how you are going to manage. That you have told God about it is enough. He has a good memory.
- Blessed Jeanne Jugan


Okay, so I know there's good and bad in every situation.

Good: My right leg works fine. My right arm doesn't hurt. My right eye doesn't have a burst blood vessel.
Bad: I also have a left side, to which the above statements do not apply.

I'm going to post my daily goals up here. It is too easy to lapse into a couch potato coma otherwise. 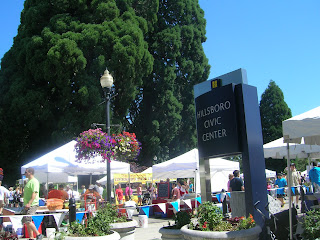 The city of Hillsboro has got a fixation. They want to make it into the Guinness Book of World Records. Three years ago it was trying to get the record for the largest number of people in one place all wearing Groucho Marx glasses at one time. The next year they tried to get the record for the most people in one place all playing the kazoo at once.

This year, it was yo-yos.

Each year, the city shuts down Main street and holds a Celebrate Hillsboro party, with booths and games and bands. Everyone who wanted to participate in breaking the record gathered in the plaza (after filing through a turnstile for counting purposes). City officials handed out yo-yos and gave instruction on how to use them. They also had some experts in the crowd. One guy in particular was amazing.

One of my goals is finding cheap free ways to get out and socialize, and this definitely qualified. They didn't make the world record, but people had a good time. 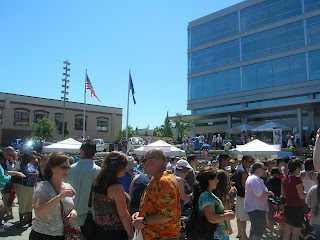 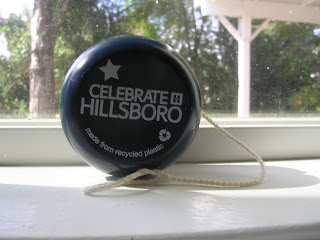 Plus, I got a free yo-yo.
You never know when that might come in handy.

My date with Hugh Jackman

[This actually took place a few months ago, and I never got around to mentioning it before.]

For once, I spent Mother's Day at my mother's house. When I found out that Hugh Jackman was trying out a one-man show, I told my mother that I'd take her for her Mother's Day present.

I explained that he was an actor, singer, and dancer. I mentioned that he was best known for a science-fiction movie where he turned into a sort-of Wolverine character... my voice trailed off as I saw her face set into that forced "that will be lovely, dear" expression. The poor woman was clearly anticipating an unpleasant afternoon.

When we got to our seats in the Curran theatre, she looked around in some surprise and whispered "There are people my age here!" I am sure she was anticipating being surrounded by teenagers and people wearing Star Trek outfits.

Hugh (yes, we’re on first-name basis... I mean, we spent the afternoon in the same room, what else?) was trying out a one-man show of his favorite songs, mostly show tunes. Oklahoma!, Carousel, stuff like that. The man can sing. The songs were mostly arranged traditionally, though he also threw in a surprisingly effective rendition of ‘Over the Rainbow’ with didgeridoo accompaniment.

In between, he talked about how he ended up where he is, and chatted with the audience. His dad was in the audience. (On opening night, Nicole Kidman showed up.) He told a story about the first time he played Carnegie Hall. His father was in New York at the time, so Hugh (first-name basis, remember?) picked him up on the way to the theater. His father showed up in black tie, and Hugh told him that it was a casually dressed event. His father refused to change. "MY son is appearing at Carnegie Hall. It is a black tie event."

Apparently, the national motto of Australia is "I'll have a go." That seems to have been the way he made the choices that led him to being on stage at the Curran on Mother's day. He didn't have any interest in performing when he was young; he was more interested in rugby. But a high school friend mentioned that the school was putting on a performance of Music Man, and it was a chance to meet girls, so "I decided to have a go." His first performance was as one of eight salesmen in The Music Man, the opening scene. He still remembered all the lines in the scene even today. To prove it, he sang all eight parts with a rapid-fire delivery, with only a snare drum for accompaniment.

Hugh seemed to thrive on the interaction with the audience. Once, during a rendition of Peggy Lee’s ‘Fever’ he commented on how hot it was and tugged at his collar. A woman in the audience yelled “Take it off” and he shot back “I will if you will.” He went down into the audience, along the front row, gyrating his pelvis to the rhythm. At one point he looked down at the man seated directly in front of him and grinned. "You're trying so hard not to look, aren't you." I'm not sure what the man said in response, but Hugh laughed.

I got the feeling he was still trying the show out, he would comment on how some jokes got a laugh one night and not the next. Very off the cuff except for the singing and dancing, which he’d clearly worked on. And he was clearly having great fun.

Back home, I heard my mother mentioning to my sister that "he was quite a good singer, actually." I think she was still feeling relieved that there were no references to Star Trek.

It's a mixture of good news and bad news

Depressing Study du Jour:Female unemployment at its highest in 15 years... outlook bleak.
That study was in England. I'm not looking for a job in the UK. I keep telling myself that makes a difference.

I am surprised that they indulged in another round of layoffs when the company is already so short-staffed. It bodes ominous in terms of the quality of the output. Maybe the layoffs mean more money for the ones who are still there. A lot of people were quitting because the company hadn't given any raises in three years, and the engineers could find higher-paying jobs elsewhere.

Luckily, this now means that I know a bunch of people who are now employed in other companies. Companies that might be hiring.

I know I should feel panicked about losing the steady paycheck, and I probably will panic shortly. But right now I feel as if I've been let out of prison.

Also on the Bad side is the fact that I really can't exercise at present. A couple weeks ago I tripped and fell, landing on my hands and knees. My left arm was so swollen that I couldn't bend it more than 90 degrees for several days. The left leg didn't feel so bad at first, but as the arm has gotten better, the knee has gotten steadily worse.

Went to a doctor, who admired all my bruises (not to brag, but they were impressive). All he said was "well, if it hurts then rest it." Seems to me that it should be showing some sign of getting better by this time. I don't think the skin should still feel numb to the touch after two weeks. Going to see another doc next week. Maybe he can recommend a brace, or stretching exercises, or something.

At present, I can only exercise using my right arm and leg. Know any good one-sided workouts? I'm thinking I could get back into running, but only if I could find someone to share in a three-legged race.

In the meantime, I'm working on that Positive Thinking stuff.

The New York Times has their own take on this ... turn yourself into a start-up. Lots of advice, ending with:

Finally, you have to strengthen the muscles of resilience. “You may have seen the news that [the] online radio service Pandora went public the other week,” Hoffman said. “What’s lesser known is that in the early days [the founder] pitched his idea more than 300 times to V.C.’s with no luck.”