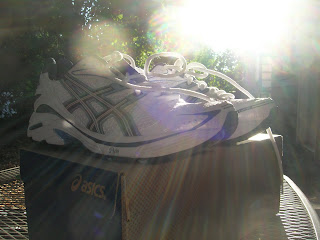 I have seen the light. And the halo effect, as well. Be nice if these shoes were this bright at night, but alas they're not. Still pretty comfy.

Too hot to run during the day. My house had turned into a furnace, even at night. So I went out into the street at 11 at night to run.

The streets were empty for the most part, but still the feeling outside was oddly welcoming. Almost everyone had their front door propped open, in the vain hope of a breeze. So I ran past people watching television, people hunched over the dining room table playing a game, people letting their dogs out into the yard one more time -- people performing their ordinary night-time activities, except for the ones that are usually performed in stuffy bedrooms.

For some reason, the asthma has been worse during the heat. Dust? Allergens? Whatever it was, I broke down and used the inhaler, and ran anyway. Felt rather surreal to finish up at 11:30 at night, like the normal rules of having to get up and go to work the next day didn't apply.

Sadly, I did have to go to work the next day, but it was worth it.

Been exercising. Not been talking 'bout it.

Got off track.
Back on track soon.

Wanted: verbs, pronouns, and adjectives.
Need experience being used in sentences, preferably on blogs. Must be able to make sense when used in conjunction with other verbs, nouns, adjectives, articles, and especially prepositions.

Forget Tipperary... it's a long way to anywhere on this road 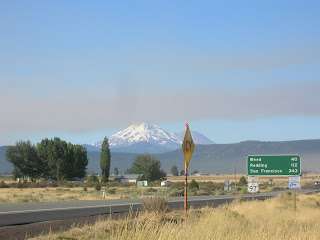 The north side of Mount Shasta (as seen from MacDoel)
One way to tell you're really bored is if you find yourself taking the long way home.

Everyone told me I was crazy to go to Portland from San Francisco by driving up the eastern side of the Cascades. But I've gotten to the point where it feels like I can drive the I-5 corridor in my sleep. I was so bored with it that I was afraid that my subconscious might find itself called upon to put this theory to the test.

So I took a detour at Weed. 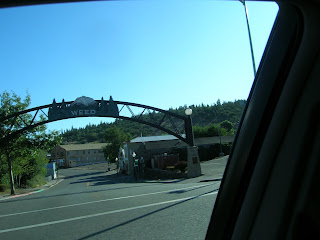 For some reason, the stores in this town sell a lot of tie-dyed stuff

It was a looooooong drive. 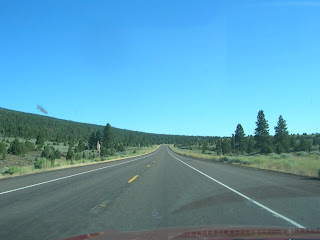 I'm sure there were a lot of really beautiful views of the snow-covered volcanoes to the west, but I couldn't see them because it was so smoggy. The whole place looked like a depopulated L.A. (With a lot more trees, of course.)

According to a man I asked in a gas station in Bend, they'd apparently had an incredibly fierce thunder-and-lightning storm a couple nights before. The man said there were fires all over the place and it was smoky all over Central Oregon. 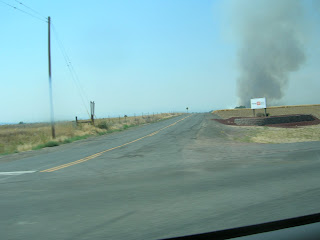 Some of those fires were pretty close to the highway. 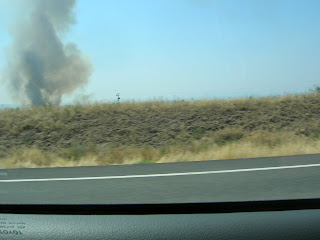 Apparently they didn't do any major damage. None that made it onto the (western Oregonian) evening news.

I know this is supposed to be an exercise blog, but I haven't been exercising lately. Or eating right.

For the duration of the road trip, I gave up trying to eat right and exercise. I devoted myself to feasting and family for a whole week. It feels strange to be home again, and it's amazing how hard it is to fit myself back into the Good Merry mold. Sigh.

I've not had access to a scale for the past week either. Since I've gotten back, I've gone back to weighing myself. Looks like I gained 5 pounds (wasn't kidding about the feasting) and then lost 1 since I came back.