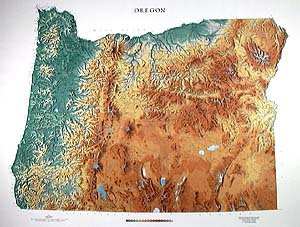 Topographical map from Maps.com
Got a beautiful, artistic topographical map of Oregon, so I wanted to get it framed. The woman had to trim a couple inches off the side, but she apparently had difficulties because she couldn't make the state look 'square.' Apparently she'd prefer to only frame maps of Kansas.

Anyway, people were staring at me like I was a complete nut. Framing a map?
One woman asked if I were a teacher doing this for a project.
"No, I like maps."
"Oh." Blank stare.
I tried again. "I like to know the area where I live. For example, that mountain over there," I waved my hand south. "What's its name?"

From the Yamhill County website
She looked at me with gentle pity. "Mount Hood," she said. 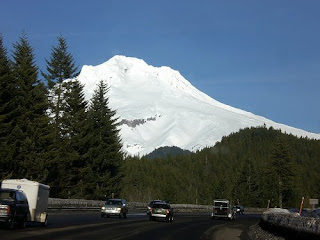 Mount Hood is east of Portland. Has been for years. Plus it's about 10,000 feet taller.
"Um, no. If you go south toward Newberg, you climb over a mountain.* Do you know its name?"
Another blank stare. At her side, the saleslady also frowned, deep in thought. Then they both shrugged and went back to framing the thirteen identical pictures of the woman's toddler.

Maybe it is strange, but knowing the names of places makes me feel that I'm not living in a void. Names give a landscape solidity. That's not quite the right word, but they act like anchors to ground you in the world around you.

Seems strange to me that people could live in a valley, drive around it every day, and not feel part of the place. It's a vague backdrop that fades into insignificance compared to important matters, such as what's on television that night.


Becoming 5 of the 7 Dwarves

At last count, I am Bashful, Sleepy, Dopey, Grumpy, and Wheezy.**
Not Happy, though I did go to see Doc. She said the coughing et al. sounds like asthma, take this, and that, get seven samples of blood drawn and take three more tests at different doctors' office.

I'll say this for her, she's thorough.

One of the tests I have to take is at the office of Dr. Watson, which immediately made me think of how many times this man has had to hear Sherlock Holmes jokes since he got his degree.

It's nice to be able to apply a label to the coughing and shortness of breath, and it's a lot better than some of the possibilities that it could have been, but I'm still miffed. How am I supposed to exercise if I can't breathe good? Hopefully the drugs will help so that I can get out and do things instead of being a couch potato.

*If you drive from Hillsboro to Newberg, you cross over the Chehalem mountains.

**Wikipedia and Walt Disney are in a conspiracy to make people think the 7th dwarf is named 'Sneezy,' but I like my version better. Artistic license.
Posted by The Merry at 8/24/2008 06:14:00 PM

I totally appreciate your appreciation for maps. I live in Maryland and even I know the name of our mountain, Sugarloaf. Hey, it's a small state, we've only got one. I don't count the Appalachians because they only cut across the tiniest corner of the state, barely inside the state at all. Come to think of it, I'm not sure Sugarloaf even counts. It's probably more of a hill, but like the Englishman who went up one, we're proud of it.

I've always loved maps too. I can't believe they thought it was weird.

Florida doesn't have much topography so I'll lust after your Oregon instead :-)

Oh I love maps and globes and any kind of reference material really!

Your asthma can be controlled, it will just take a bit of time to find the right combination of drugs and timing and dosages. Until then, coffee works to open the bronchial tubes if you are wheezy. Cousin Leah mentioned the other day that holding your breath for a few seconds (as long as you can) can also help. I know that one sounds just wrong, but it actually works. Something about balancing the carbon mon or dioxide in your lungs.

I adore maps! I'd frame mine too, but I have to wait til I have a place of my own first. My landlord is not too keen on us making holes in the wall right now. Pity.

Sorry to hear about the asthma, but like you said, at least you know what is troubling you now. Good luck!

Good to know that there are other map freaks out there! I'm not alone. (Though I was in that store. Honestly, those people were... okay, let it go, let it go...)

And Reb, that's interesting about holding my breath. I was doing that a lot before I starting doing the drugs. Kinda freaks people out when you do it, though. (Hmmmn... should've tried it in that store... let it go...)

hehe, your post made me giggle! And I'm glad you've seen your doctor and are on your way to feeling better. :)

I like maps, too! Hubby and I have a gigantic map of the world hanging in our living room. It isn't framed, but we still keep our eyes open for a frame which would be big enough -- it's one of those giant wall-hanger maps and usually you can't find frames that big.

Thanks for visiting my blog today! :)

I am hopeless at directions and can get lost even with a map. But they sure are prettier the nagging sound of a GPS voice telling you you're going the wrong way. (And topographical maps are the prettiest!)

Oh, and I think wheezy is a much better dwarf name than sneezy!