Travels with the Librarian 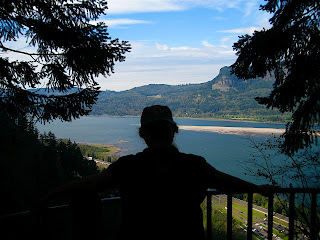 Photo credit: The Librarian. All rights reserved. So there.
The Librarian arrives, the axe falls


The day she came, someone dropped an axe in my front yard.

I know that some of my neighbors are rather strange, but so far none of them has shown any tendency toward dropping sharp-edged weaponry in front of my house. This is the actual axe in question.
Until the Librarian showed up for a visit. Coincidence? I wonder...

Some years ago, when I was living in California, a couple of buzzards came and sat on a telephone pole outside my window. In all the years I lived in that neighborhood, I had never seen buzzards in that area, let alone two of them sitting hunched over giving me a beady-eyed look of suspicion. Reminded me of those old Westerns where the hero is lost in the desert with no water, and the vultures are giving him looks as if to say "Hurry it up, would you? I'm missing my favorite TV show waiting here." Ominous, in other words.

After a couple of hours they flew away, but the very next day, I was involved in a massive layoff at my company -- almost 1,000 people, about 1/4 of the company gone in one swell foop.

So while I'm not really superstitious, I still wondered if the Librarian were trying to tell me I was going to Get the Axe. 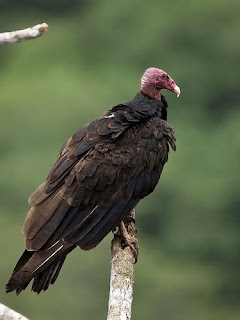 Not an actual photo of the Librarian

It's much nicer in Indianapolis 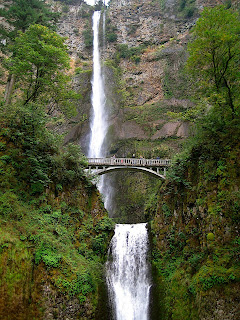 Photo credit: The Librarian. All rights reserved. So there.
The falls are scenic. It's against human nature not to take a picture or two thousand of them. If someone is there alone, it's also natural to ask a passerby to take their picture standing by the falls. Then the asker starts talking to you; that's another law of nature. The conversation is not always restricted to a mere "thank you"; actual chatting generally ensues.

Sometimes this is a pleasant thing. The Librarian got caught by a woman from West Virginia (she was originally from Pittsburgh, mind you, but she lived in West Virginia, and she was hiking solo while her husband was in a conference in Portland, and she'd done some touristy things with her sister-in-law but she wasn't up for a hike, and it was really great to see the falls before they went home on Monday, though it was a pity her daughter couldn't have come since she loves hiking so much). Informative but also cheerful.

Me, I had a different experience. Found myself being "chatted with" by a middle-aged man who lived in Seattle and couldn't wait to move back to Indianapolis next week. "It's much nicer in Indianapolis," he said, after I took the picture of him holding a McDonald's hamburger and standing next to
the falls.

I smiled, nodded, and moved on down the trail. He followed me, so I ventured a question. "Seattle isn't a nice place to live?"

"No, it's horrible. They hold mass rallies with skateboarders all the time. 3200 skaters going down the hill by my house!" The memory made his voice rise in indignation. "They don't have skateboarders in the Midwest."

"Yes they do," said a man passing by in the opposite direction.

"Hmph!" said my companion. "Not in Indianapolis, they don't." He seemed to find the thought comforting.


Why there were no librarians on the Lewis & Clark expedition

The Librarian told me she wasn't observant, but I didn't believe her. Thought she was being modest. She's very perceptive, picks up on things that I never see until they're pointed out to me. All the same, it's true that she's not always that observant.

We drove west. As we came over the last hill, the horizon was filled with the panoramic view of the wide blue Pacific. "Look!" I said. "There's the ocean!"

And the Librarian said, "Where?"

After dallying at Cannon Beach, we idled down the coast to Cape Perpetua. If I'd been better at planning, I would have suggested leaving earlier. According to Google, Cape Perpetua was a three hours' drive southwest, while Cannon Beach was an hour's drive due west. I inferred that it would take two hours to drive down the coast from CB. But I neglected to factor in the difference between driving through the mountains (few towns, mostly freeway speed) and driving down the coast, which is scenic as all get-out, but with a road that winds up, down, side-to-side, and through several small towns. We're talking a long drive.

Which meant that we came to Cape Perpetua at sunset. Got some beautiful pictures 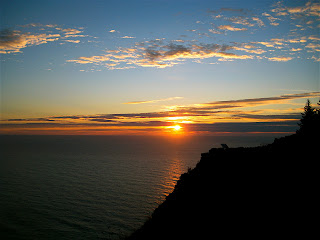 Photo credit: The Librarian. All rights reserved. Nyah.
The top of Perpetua is about 800 feet above the ocean. We drove up to the top and walked around up there, where it's flat. That's what I call a nice hike.

The Librarian, however, had a different definition of the word 'hike.' She decided to hike the trail back down to the base of the mountain. What I found scary about this was the fact that after sunset, the world gets a lot darker. Which is not the ideal situation to tackle a hike down a long twisty path down a pretty steep hill. I drove the car down and waited at the bottom, which left me with plenty of time to visualize her obtaining a twisty ankle. 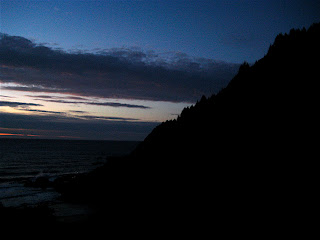 Photo credit: The Librarian. All rights reserved. I did say "dark", didn't I?
Luckily, the Librarian emerged at the bottom of the hill unscathed. Cape Perpetua behaved itself quite nicely. (As opposed to Mount Hood, which sulked and hid itself the Whole Time the Librarian was visiting.)

You'd think it would be hard to hide a whole mountain...
The long ride home

The Librarian may have missed the ocean, but I managed to miss the turnoff home. Thus we had to drive back up the long way, another hour or so up the coast and then inland. (I know, I could have turned around and tried to find the turnoff, but I was so tired and the night was so dark that I figured with my luck I would miss it again and keep on going until we hit California.)

By 11:30, we had the road to ourselves. The mountains are pretty dark at night, and I was quite tired, so of course I nagged the Librarian. Figured if I kept her awake she would return the favor.

Little did I know what Librarians do when they want to keep you awake.
They tell jokes.
Bad jokes.
Not as in not-funny, as in baaaaad jokes.

(Brace yourself, here comes an example)
Example:
Q: What did the fish say when he swam into the wall?
A: Dam!

We were almost back at The house when we got held up by a freight train. It was a long train, with lots of very dull railroad cars, and it seemed to stretch on endlessly. In the passenger seat, the Librarian sunk a little further down in her seat. At this rate, I would never be able to wake her up when we got back to the house.

I was pondering this dilemma, when what to my wondering eyes did appear...

"Look!" I nudged the Librarian. "There's Gerard Butler standing atop a railroad car wearing nothing but a smile!"

"Mpmhm," came from the Librarian. She didn't open her eyes, which was a pity, because there was more.

"Hey! There are pink-and-purple striped zebras dancing with him!"

"Yeahmhn," sighed the Librarian. Not even a flicker of the eyelashes.

"You're missing it! There are unicorns dressed up as a mariachi band! They're shaking their maracas!" 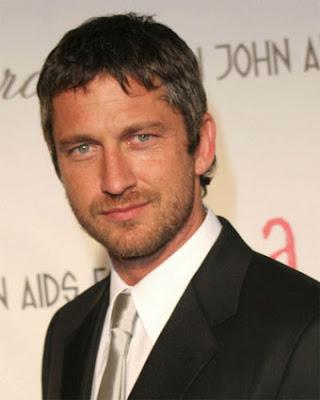