Quote du jour: What a wonderful life I've had! I only wish I'd realized it sooner.- Collette
The plus side of keeping track of mileage on the sidebar, sad are the numbers are, is that it gives me something to aim for. I've decided my goal for May is to cycle 80 miles, i.e. I want to cycle to work and back and somehow throw in an extra mile along the way.

There. I've got a goal, posted it for all the world to see. Now everything should go like clockwork. Presuming something untoward doesn't come up.

Since I'm familiar with all the reasons why I don't always cycle to work, I've lined up a list of excuses and ways to deal with them ahead of time:

Done! Finally. Got soaked to the skin this morning, so cheated and took the Max in part-way. Made up a few miles at lunch -- it was actually sunny, and I had to take off my jacket! Then back home, racing the thunder clouds. Feels good to have accomplished something.
Posted by The Merry at 5/31/2011 06:11:00 AM 6 comments:

Labels: Another sign that Mary has finally flipped, cycling

Good: I've lost 5 pounds this week!
Bad: Thanks to the flu.
Good: But it was 5 pounds!
Bad: Excuse me? Did you miss the part about getting sick? You've done no exercise except for some measly walking, for Pete's sake.
Good: 5 Whole Pounds!!!
Bad: Sigh

I'm feeling much less dead now, so that's good.
I'm planning to take the weekend off, which is better.
Hell, I might even exercise. What more could you ask for?

Alas, I did not get taken up by the Rapture on Saturday. Well, I'd heard they didn't take Catholics, so I suppose that's no surprise. But I figured that other people might have been taken, since that means the rest get to suffer and I was stuck working (unpaid overtime) until about 8 at night. Stopped off at a convenience store on the way home to pick up some yummy green vegetables frozen pizza.

I saw another woman shopping there and was struck by her outfit. She was dressed all in white: white dress, hose, and shoes. Her dress was made of a very fine fabric with a bit of a sheen to it, but it was extremely plain: it covered her from the neck down to her ankles. The only decoration was some severe pleating down the front. I'm not sure if 'decoration' is the right word; the pleats were so straight and narrow that the general effect was one of severe repression. The whole look wasn't that of a nursing outfit, and she certainly didn't resemble a bride. The impression I was left with was one of those traditional Protestant baptisms. I wonder if she'd expected to spend her Saturday night somewhere else beside a convenience store in Oregon.

Site du jour: I loved this post from Coffee Helps about the 8-year-olds in Korea explaining their view of the American Evangelical's theory of End of the World to their Irish teacher during a dramatic thunderstorm.

LBS: the good, the bad, and the fugly

An episode in which our heroine visits her Local Bike Shop (LBS).

The first time I went there with Binchy, my Bianchi Eros Donna road bike. I was wearing my "It's definitely Rainy/Winter/Nasty weather" jacket, which admittedly does cover me like a tent. Still, I'm not used to having someone address me thusly "Hey, man!" I mean... man?? I don't think I've been able to pass for a male since I was 10.

Still, a Merry is the forgiving type, as a rule. So I went in again, to ask them what they could do for my poor Iron Horse, the hybrid/mountain bike that I use for about town. The trouble is, riding this bike is hell on my knees. It wasn't always thus: I've ridden it to work for years; I've ridden 50 miles without a problem; I rode a few Bike Pedals without a qualm. And I haven't gained a noticeable amount of weight since then. So why, now, do my knees absolutely scream when I ride the Iron Horse?

The guy-up-front frowned. Then he said, delicately, "Well, knee problems are always caused by the bike not being sized right. I was thinking... maybe something in your position had changed recently?"

Wasn't until I'd left and headed home before it clicked that he was implying that my weight was causing the knee problems. This might be a reasonable suggestion if I hadn't ahem quite clearly mentioned that it was a recent problem -- quite recent -- and I'd been riding the bike regularly.

Went back again, this time with the bike in question, and took it straight to the Service department. They looked at the bike more than they looked at my hips, which I liked. They said what they saw was wrong with the bike. (Again, no hips were mentioned.) And they said that the bike did not need the Full I-mean-the-whole-enchilada Tune Up, which costs approximately 200 times more than the bike itself. (Okay, that's mostly because I got the Iron Horse for free, but even so-- a few full tunes ups and you'll start wondering if it might not be simpler to just buy a new damn bike already.)

"What's wrong with it?" I asked.
"Your bottom bracket is totally shot," was the reply. (Only in a bike shop would this be a response that didn't call for a slap across the face.) "Other than that, it looks pretty good."

I got the Iron Horse back tonight. Though I only rode it a mile home, the knees seemed to feel pretty good about the experience. We'll see how they feel tomorrow, after I ride to work.

Exercise du jour: Walked a few miles, i.e. walked to and from the Max station. One of these days I'm going to take a walk at lunch rather than work through that alleged 'rest' time. (My cynical self adds: yeah, and then I'll go dance with unicorns in a magic forest before riding off into the sunset with Prince Charming.)

May 18: Huh. Cycled a few miles. I spent the whole day stressing out at work -- another co-worker quit today -- and stayed so late that by the time I finally went home I didn't want to ride. Or walk. Or do anything but curl up in a ball and whine. Or wine. Whatever. Really, I need to work on my attitude. Whoever said it was going to be all fun? Tomorrow, 2 goals: ride to/from work and take a walk at lunch. Maybe I'll look for unicorns in the nearby forest.
May 19: Well all right, maybe the walk at lunch was a bit optimistic. But I'm planning on taking the weekend off, so I need to get things done while I'm there. Still managed some to and some fro cycling. Much easier to get 'er done when it's so absolutely beautiful out. [Merry Makes a Brilliant Discovery. No Film at 11.]
Posted by The Merry at 5/17/2011 10:00:00 PM 14 comments:

Good or Bad? Tsk, it's all relative

Old Word Made New: Context: a text sent by a jailbird, full of convincing untruths.

You've won the Lottery.
Good: The I.R.S. doesn't know where you live.
Bad: You're in a Shirley Jackson story.

Good: Got some exercise.
Bad: Not as much as I wanted to.
Good: Look, be glad for what you got, okay?
Bad: Okay, okay, fine, enough already.

This week, it's a short week. Lots of relatives, few opportunities for working out. Regular exercise will re-commence next week.
Posted by The Merry at 5/05/2011 05:04:00 AM 8 comments:

Labels: Another sign that Mary has finally flipped, cycling, walking

May day? I'm starting to believe in spring 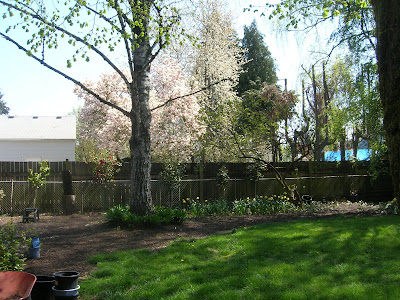 Quote du jour: Inspiration does exist, but it must find you working. -Pablo Picasso 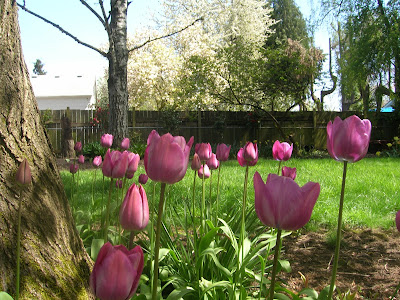 I suppose it might be true... spring might be ready to sprung, as it were. But I'm almost afraid to believe in the possibility.


It could all be a giant hoax.

Sure, the tulips are tuliping, or so they claim. 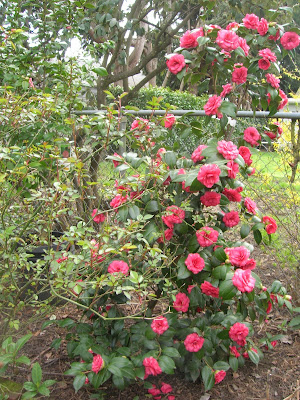 It could all be a dream. I might be hallucinating the camellias.

On the other hand, I could use all this profusion of bloomsion as a sign that it's time to get out there and show off my mad cycling skills.

Sunday: Done! I'll have to dig up my traditional gold star, dust it off, and post it up here. I think I'm getting faster.

Monday: Done! But much, much slower than yesterday. Why? Is it because I was carrying my lunch and work clothes and such? Maybe it's a sign I should walk tomorrow.

Tuesday: Why did walking a measly 2.5 miles end up with aching shin muscles? What the frack is up with you, body? Sooner or later, you're going to have to deal with the fact that we have to exercise!