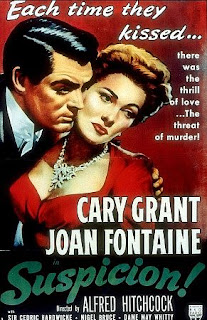 Anyone who's ever seen the movie "Suspicion" knows that technically this blog post should be titled "Me & Joan Fontaine," as Cary Grant’s character was the one causing the suspicion -- but Joan Fontaine's character was pretty dopey in this movie. And honestly, which one would you prefer to be linked with? Exactly.


Call me suspicious, but sorting through descriptions of houses awakens my inner paranoiac as well as irritating my inner editor:Found a bank that would be willing to loan me as much money as I’m comfortable borrowing. Bottom of the market, definitely, but there are a few houses out there all the same. Not too many. 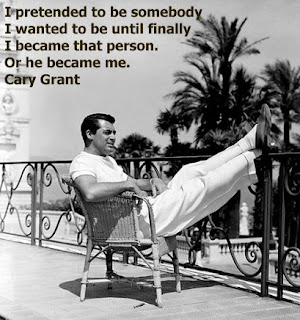 The next step is to start interviewing house agents. Have no idea how to go about doing that, but we’ll see what happens. I think the best thing to do would be to pretend I have some idea what I’m doing. I mean, Cary Grant didn’t start out as Cary Grant. I’ll read up on it a bit. Must be documentation out there somewhere. Also, this would probably be a good time to practice being suave, debonair, and charming.

And for some reason this isn’t doing wonderful things for the waistline either. I’ve gained four pounds in the last three days. Clearly I need more stress in my life. (Note to God: I’m just kidding about that last bit. Honest.) Or maybe the BCB theory is correct, and unbeknownst I’m eating more food to compensate for abandoning my dog. (My mother is actually spoiling the dog rotten, and the dog seems to be lapping it up, but that’s not the point.)
Posted by The Merry at 10/18/2007 06:29:00 PM

You definitely don't want to be Joan Fontaine in suspicion. I love Cary Grant, but could there have been a more annoying, wimpy, doe-eyed leading lady.

Good luck with the house hunting. Sounds horrendous, but think how good it'll be when you finally settle. No more real estate agents to deal with, no more slack landlords - it's your space.

Can women be suave and debonaire? Research that while you're at it.

Thanks Kathryn, I keep thinking how nice this will be when it's done.

McB, why should the men get to have all the fun? I bet Gloria Steinem would tell me I could be suave. Then again, you probably know me better than Gloria :(

Sheesh. You're the Mary I was talking about. Was I wrong? A reyou doing NaNo or 70 Days of Sweat?

I don't know Gloria at all. And I always like Cary Grant,regardless of his sexual proclivities. As long you're not referencing him from Mr. Blandings Builds his Dream House, you're fine.

Okay, it wasn't Cary either. It was OH, Louisa and ZaZa. There was a Mary signed up and I thought, sheesh, when does that woman have time to sleep? And Sweating with Sven just sounds like you. :-)

That depends entirely on how cute Sven is ;)

House hunting is seriously Not Fun. I hope you and the Right House find each other soon.