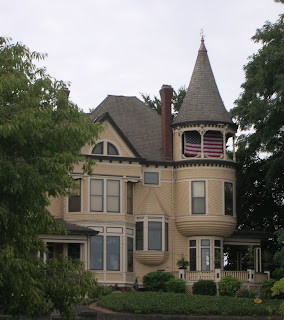 And so it begins.

No, this isn't the house that the Realtor took me to. Far from it, alas. Learned that people who write descriptions of houses not only are grammatically impaired, they also have problems with reality in general. The house wasn't terrible, but it wasn't all they said it was, either. Why do sellers do that? It's like a guy in a personal ad describing himself as another Tom Cruise, when he really resembles Tom Arnold. I want to fall in love, feel a rush of heady infatuation that would make me throw caution to the winds and sign on the dotted line, not feel let down.

I'm not in love with the realtor, but I liked her well enough. She seemed like a nice person. (And resembled neither of the Toms, Cruise nor Arnold.) Pointed out some of the flaws in the house as well as some of the good aspects. At least I've broken the ice: I have now gone and publicly viewed my first house. I've declared to the universe that I'm seriously putting myself on the market for a new home, and it better take me seriously and deliver the goods.

I'm a bit bummed about getting my hopes up about this house. Maybe it would have looked better in the evening, or after a few drinks. Heck, something like that might even make Tom Arnold look more attractive. (At least, he's been married and I think more than once.)

I think the thing to do is go for a quick walk around the park in my fancy new shoes. I am a calm, confident woman who exercises daily, eats those damn green leafy things, and is firmly in charge of her own destiny. Or at least, that's my story.
Posted by The Merry at 10/21/2007 03:47:00 PM

Ok, first of all, the real estate agent does not move in with you. It does not matter whether she is nice. What matters is whether she can close the deal without any last minute surprises -- like not having a clear title.

For five years I worked for a home inspection company. It was very educational. Do you have home inspectors out there? Are they licensed? DO NOT ever buy a house that has not been inspected by someone reputable. Ever.

Everything else is subjective. Every house has something wrong with it. Probably several somethings. But you will love whatever place you buy because it will be yours and you will make it a Home. So many flaws can be corrected by a coat of paint or new countertops or a vegetable garden. Find a place that says "Home" and make it yours. It really is that simple.

Unless of course you want to relocate to the mid-Atlantic states, then there is a house that is about to go on the market that you have just GOT to see. Fenced back yard, lots of shade trees and very dog friendly. Quincy the Wonder Dog and I will be happy to give you the personal tour.

The commute might be a bit of a stretch, but your house sounds lovely!

With a realtor, I'm looking for someone I can trust AND who knows what she's doing. That's my trouble, really. I can't tell the difference between an irredeemable fault and a trivial cosmetic one. I'll have to find a house I love and then have a (licensed!) inspector tell me if I'm lusting after a loser.

And may I add...YOU pick the licensed inspector who will look over your house.

My realtor suggested hers because he was so experienced. He was a nice grandfatherly type who made me feel secure...and he gave me a long list of things to fix after I moved in, and I appreciated that because I was YOUNG and IGNORANT.

I didn't realize the seller has to bring the house up to your level of satisfaction if the seller wants you to buy it. If he doesn't, he can wait longer and get someone else to buy it, but as the buyer you can ask for things to be fixed.

I got such an education from my own naivety. Is that how you spell stupid? I'll look it up. hehe Just sayin', don't do what I did and you'll be fine! I ended up loving my house, but I could have loved it for a lot less out of my own pocket.

Ditto what BCB said about getting the place inspected. Very important. Also the inspector is a great person to ask questions of because he has no investment in whether or not you buy the house. Of course you have usually at least made an offer and had it accepted before you call in the inspector. But he can still answer questions like "is that supposed to look that way?" or "Is this something I can do myself?" And yes, if there are things you are uncomfortable about you can request the seller to fix it before anything is finalized. My place was in pretty good shape but I had the sellers take care of two things. One involved the heating/AC system and was actually a minor fix, but one that even the sellers weren't aware of. The other was to have the toilet in the spare powder room secured better. Again a minor fix, but it wobbled rather alarmingly to my mind.