May I touch your toes? 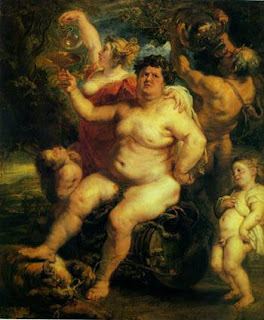 If I can't touch my own toes, does it count if I am able to touch someone else's?

What is fitness exactly? Are you fit if you can touch your toes? Last week, Fat Girl on a Bike devoted a whole post on her blog to trying to decide what the word "fitness" meant. Everyone had a different definition to offer.

A few hundred years ago, the Bacchus in Rubens' painting would not have been perceived as so grossly overweight as we see him today. Back in the days when starvation was a real issue in the Western world, fat was the fit option; it made you fit to survive the harsh times.

I seem to run across fitness articles on British websites rather than from America or other nations. (Are the Brits more fitness conscious? More probably I'm not looking in the right places.) I found this article today: Health and fitness: How do you shape up against the nation?

I thought this article was interesting because it offered five tests you could use to measure whether you were in shape or not. And because most of the tests seemed like something most people should be able to do. But according to a survey quoted in the article, most people can't:


I'm certainly not in good shape, but even so I can do these things. I'm wondering if this study asked people whether they could 20 situps, or if the researchers tried a different approach. If they offered people $20 to do 20 situps, maybe the people would suddenly discover that why yes, they actually could do those situps after all, thanks for the cash, Mac.

I was going to ask you, gentle Reader, if you could perform these tests. But I decided not to, because a) it's a bit on the personal side and b)most of the people in blogland are a lot more fit than I am, so it's probably a silly question. But do you know a lot of people, real people in the real, non-Internet world, who would have trouble touching their own toes?
Posted by The Merry at 10/04/2007 09:05:00 PM

For the record, I have never been able to do my bra up in the back, even when I wasn't overweight. :+)

At least a quarter, if not more, of my mother's family couldn't touch their own toes. No joke. I can do everything on that list easily except the sit-ups. 20 crunches, no problem, but not sit-ups. I have no abdominal muscles to speak of and I am reminded of that every time I do pilates. I come from a long time of strong, big-boned women. I'm built for farm work, not a catwalk.

As for the apparent Brit obsession with fitness... I'm not sure about that. What I do know is that back in the states, I am only a little bit heavier than the average person I see on the street. In the UK, however, I am by far one of the larger woman. That could be because I live in a university town and a lot of the people I see are young undergrads, but I make sure to observe people in all age ranges and I would say that my statement still applies. So, although I think Brits are smaller than Americans on average, they are still dealing with an increase in national obesity just as in the states.

Theresa, yeah, the bra-thing is more about flexibility rather than cardiovascular stamina.

But so is the toe-touching, isn't it? And those things can be changed. I mean, people start out with different degrees of flexibility, but it is something that you can improve if you stretch every day. I'm going to practice putting on my bra the hard way. It's a goal ;)

ct, what I liked about the UK was that so many of the people had legs whiter than mine. Not many places on the planet where I look tan, so that was very cool.

I thought it was good that the study offered several different ways to test your fitness. If you can do most of the things on the list, it's probably a good sign.

I have a hard time with my bra at the back. I didn't used to, but after a couple weeks not being able to do it because of hand numbness, I find myself unable to di it now.

Of course, flexibility has always been my weak point. Need more cardio/strength tests on the list . :)

It may be a measure of flexibility, but are they worried about whether men can reach behind their own backs and by touch hook four small eye-clasp-thingies?

Flexibility, hell. It calls for a good memory. Otherwise you end up with both hands stuck up behind your back at an awkward angle while you try to remember if this bra has four eye-clasp thingies or five, and trying to figure out why they don't seem to want to go into the right holes.
Boy, it's a good thing the dog is too well trained to snicker. A human audience would have been chortling while I got dressed this morning.