It's all my mother's fault 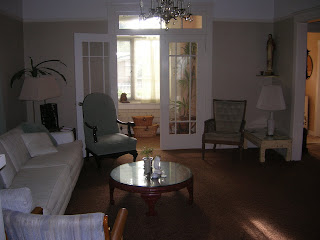 Really. It is. Not that she meant to screw with my head. She didn't plan it at all. But the fact remains that I grew up in a Victorian, 10-foot ceilings, molding, sun porch, lots of space (once all them older siblings moved out).
It had a living room that looked like this:

Now I look for houses and the living room looks like this: 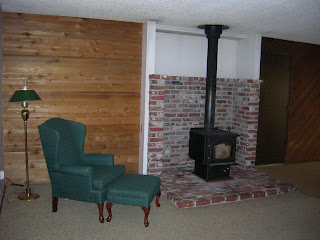 I had my back against a wall when I took this picture. They couldn't stage the room with a whole couch because it would have taken up too much room.

I'm spoiled, that's my problem. This house had an incredibly beautiful garden, but the house itself had such small rooms that though it was a three-bedroom house, I don't see how anyone could live in it.

I mean, I know what it's like to live crowded. I grew up in a three-bedroom house that held ten humans, a couple of dogs, assorted cats, and a series of non-wanted tenants such as mice, rats, raccoons, and honey bees. About the only varmint that didn't try to take up space in the house were skunks, and even then it was probably because they couldn't find any space.

I'm not planning on having any of the above living in my new house, except for the dog. But three bedrooms in a 900 square foot house is maybe squeezing things a bit. If you have really tiny bedrooms, you need a larger living room to balance things out. If this house had had only two bedrooms, and a larger living room, I think it would have been a lot more livable.

So buy the house and knock down some walls.

Seriously, the problem with this room is that paneling. It's making the ceiling look even lower than it is because of the horizontal lines. If the ceiling were paneled the same way it would look cozy. As it is, it's just schmooshed. What you do here is counter the effect with maybe some tall plants. Those fake ficas would do nicely, and some fake plants around the stove too. Then use lots of recessed lighting and spot lights to brighten the whole thing up.

I hear you...champagne taste with beer budge right? LOL. The first pic is beautiful. I am sure with a lot of looking around you will find what you are looking for. It seemed I was never going to find the right apt when I was looking the past summer but finally I found what I wanted. I know its a bit different with houses, but Im sure youll find the right one.

Hang in there. House hunting is depressing and traumatic for most people. I'm always amazed at how much they want and for so little. But then, Shazam! , you'll find the house you want and you'll be ever so grateful that you did, or else you'd have to live in one of those other haunted homes. Whew!

Find a house with good bones that you can afford and fix it a bit at a time to make it look the way you want. 900 sq. ft. is small but I'm sure you'll find the right home for you soon. Good luck!