A walk with a steep learning curve? 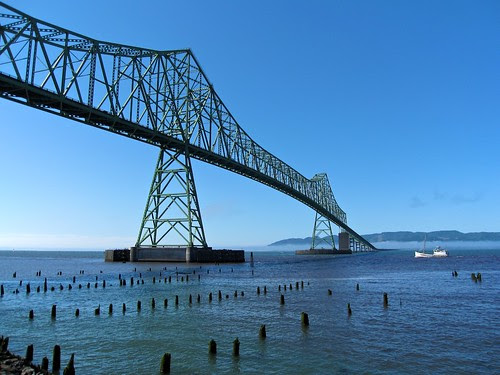 Quote du jour: The sovereign invigorator of the body is exercise, and of all the exercises walking is the best. - Thomas Jefferson

So, I did it. Signed up for the Great Columbia Crossing with my exercise partner. It's a 10k walk/run across the mouth of the Columbia river, on a bridge that shuts down one of its traffic lanes for the event. I think it's the only time in the year you have a chance to walk this bridge.

It's also got a time limit of two hours. At walking pace, 20 minute miles for six miles. I can do this. I've been walking to and from the Max station as part of my commute to work, which means three to five miles of walking a day, depending on which station I walk to. Plus, I've persuaded my exercise friend to walk with me at lunch a few times during the week. I don't think I'll even need the inhaler (but I'll take it anyway).

It does have some aerobic challenges to it. The Astoria bridge has a steep hill part, where the bridge angles up so that ships can pass underneath. 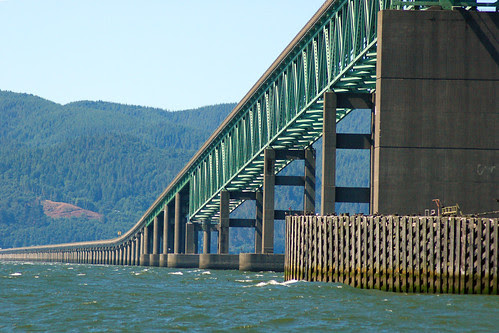 To train, I'll try to work in a couple of hill walks at lunch. And I could be misjudging my abilities. Who knows, maybe we'll both sprain an ankle and need to be picked up by the slug van. Whatever happens, it should be interesting.

No star. No excuses either, not really. For some reason my legs felt really swollen after yesterday's exercise, and my lungs kept verging on needing the damn inhaler, which makes no sense since I wasn't exercising but still I kept coughing and wheezing and... okay, who's the wise guy who put on that sad violin music in the background? I admit that I was a wuss today; I'm just trying to figure out why. I think I'll just count today as the day of rest, since I did (inadvertently) work out yesterday. Cut the violin music already.

That actually looks fun! And I don't say that about many "official" exercise events.

And that's smart of you to bring your inhaler, just to guarantee you don't need it--like bringing a cumbersome umbrella will often ward off rain, while forgetting it guarantees a downpour.

Have fun training for it and I bet you do great.

Thank you Crabby! I'm hoping the sun will be shining, but if not I'll take some pictures of rain and fog and lie through my teeth about how it wasn't all that cold :)
Whatever, it should be an adventure.

I say that with much affection and an underlying tone of, um, encouragement.

In that top picture, those stark pillars protruding from the murky depths aren't solemn markers for the watery graves of those who failed to complete the crossing, are they? Just asking...

Looks like a beautiful walk, Merry. You go girl.

wagonst: what Merry isn't going to cross the bridge in

Ah, BCB, hon, you always knew that I was insane, right? I should've mentioned it before, I suppose. And there aren't that many grave markers down in the water. Just an acceptable number were sacrificed to the river gods.

RSS, I do hope it's this beautiful for the walk next week. And I hope that I don't hurt my leg this week. I'm going to avoid stairs. (Feel better soon!)

Merry you crazy lady. Such a walk! You couldn't find a flat place to exercise? Walk around your yard. Taking Tanji with you? She'd love it and holding onto the leash would drag you uphill. Have fun.

diante-the medication Merry is going to need after this walk.

Now that is the way to go!

Scope, Tanji is convinced that I don't know how to walk properly. Apparently I go too fast and don't appreciate the importance of taking the time to properly sniff all the bushes.

I had a heart attack a few years ago, had a stent put in, and was told to always keep a nitroglycerin inhaler-thing with me at all times. And I have. And I haven't ever had to use it. And I'm grateful for that - but I'm also grateful that it's there in case I need it.

That looks like it'll be a beautiful walk. Enjoy. :)

Wonderful pictures! I love bridges! You've got me thinking about some of the one's I've crossed, from the Golden Gate (on bicycle), to one made in the
1930's with rope and care over a local river, the Santa Fe. As Jimmy Cliff sang, "Many Rivers to Cross!"

Ooh, looks like fun! Wish I could be there to walk with you! You can do it!!!