The Great Columbia Bridge Crossing 2009: Doing a 10k with 5k 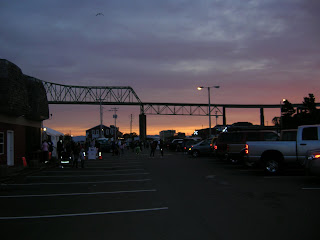 It was a beautiful sunrise.
Standing in the parking lot waiting for the shuttle to take us over the bridge, I took a picture of the sunrise. The guy next to me gave me a questioning look.

"Because it's beautiful," I said to him.

"There's another reason to take a picture," he said. "Because otherwise no one would believe you were in Astoria and it wasn't raining or foggy."

The man had a point. They only open the bridge to runners and walkers one day out of the year. In previous years, people have done this bridge crossing in rain that slanted sideways on a grey and miserable day.

On the other hand, if it had been lousy weather, there probably wouldn't have been so many people there. Judging by the bib numbers, there were an estimated 4000 walkers and 1000 runners going across one lane of a 4+ mile long bridge.

The good news was that between the crowds and the pain* and the time limit, I didn't have much attention left over to deal with my bridge-o-phobia.

*What, I didn't mention the pain part before?

I figure the best way to tell this is to use the GBU formula stolen from Marie of Mousearoo. (If she'd had the sense to copyright this, she'd be raking in the Canadian bucks now. Just kidding, Marie. Love you.) 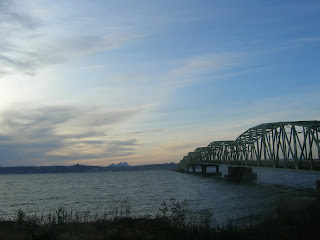 See the mountain in the background? That's Saddle Mountain.
Did I ever mention that I climbed the very highest part of that high peak?
(Well, all right, I mentioned it here, but who reads that far back? So it's okay to brag a bit. Not that the climb started at sea level, but That's Not The Point.)

Good: Remembered the inhaler. The weather was clear and beautiful, but it was friggin' cold out there. 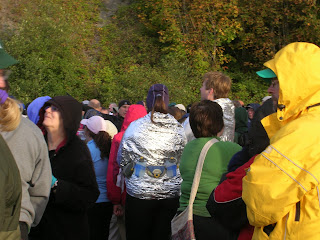 The tin foil look was much admired. Really.
Bad: Forgot I'd already done two inhaler whiffs an hour ago, and did another one.
Ugly: Got an adrenaline rush (or something that felt a lot like it) because of the inhaling and started off the first mile at a much-too-fast pace, which killed my shins from the start. (I'd already injured my shins from over-doing the sprints earlier this week. Did that stop me from doing it again? Of course not.) 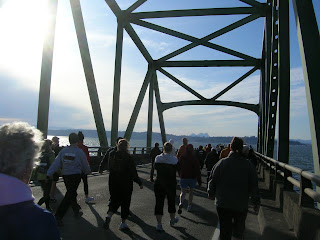 As I crossed into Oregon again, I saw Saddle Mountain in the distance.

Miles 2-3
Good: My legs didn't fall off.
Bad: After the first mile, the shins were quite unhappy, a lot of people passed me, and I ended up in the crying babies section.
Ugly: I kept going. 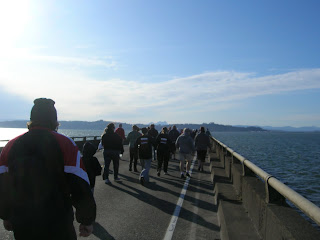 Getting closer to Saddle Mountain all the time...
Miles 3-4
Good: After the third mile, I started passing most of the people who'd passed me.
Better: The crying babies stayed behind.
Better still: I didn't fall too much off my original pace. 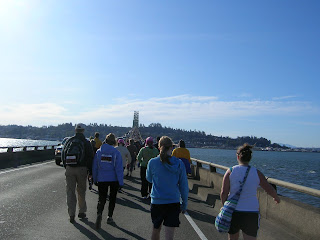 Wait a minute. What's that hill I see looming ahead?

Miles 4-5
Bad: Who put this steep incline here?
Good: While I was working harder to get air, never once started to wheeze.
Better: I could catch my breath and take a couple good shots. 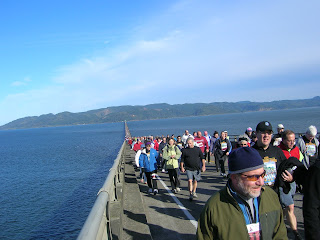 Amazing to note I'm not in the back. I don't know if you can tell from this picture, but the line of walkers stretches back as far as the bridge does. This race was crowded.
Miles 5-6
Bad: Okay, I'm definitely starting to limp by this point.
Good: I'm limping downhill.
Best: I made it off the incline and to the finish line with time to spare. 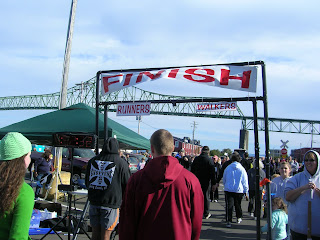 Woo (ouch) hoo!
At the finish line, a guy was handing out free hugs, so I took one.** But I gave him one back, so it's okay. 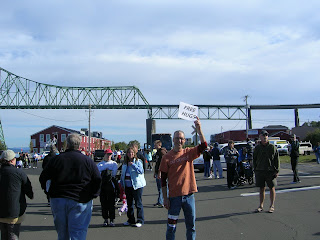 That will be five dollars, please :P

Yay, you did it!! I'm so proud. And I wish I could have been there to walk it with you! Someday...

Thanks Marie! The check is in the mail ;)

What a fun race - I'm glad you had good weather for it! Loved your "crying babies" comment - hey, at least you weren't crying like a baby!

Are you in the HR area? I'll be there this weekend, visiting my parents.

Hmmmn... Shelley, I must need more caffeine. Not sure where the HR area is.

Hood River - sorry, I use that abbreviation all the time in emails with my mom...

Great run/walk, wasn't it? I hope you had as much fun as I did. I was one of the runners a little further ahead. Since I was running and didn't carry a camera, I always enjoy looking at the pictures of some of the other 3000 that were there and reading their perspectives.

I, too, enjoyed the sunrise.

LOVED your race report! Nice job on the run and your pics were just gorgeous! Can I move by you??

congratulations and these shots are beautiful.

ahh...I was thinking my word verification was scone, but it's scome (so close to the Puyallup Fair, but oh so far!)

This is absolutely fantastic! (I meant you doing the race and finishing it, but I loved reading the report too.)

Wow, thank you everyone! I appreciate the support :)
Shelley, no, nowhere near HR.

Congratulations on your run. Loved the report. If you'd like to see some pictures my brother took of the same race, I invite you to surf onto my site. Two of my brothers joined me as I flew in from Guam to do this. Best on your running:

http://www.betterrunninglog.com (just ignore the commercial aspects of the site and click on the bridge to see the photos and read my narrative experience.

Neil, from Guam and my two other brothers