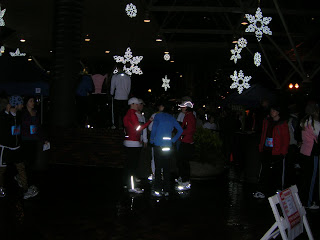 New Year's Eve is a time for reflection...
Notes on the Portland First Run 2010 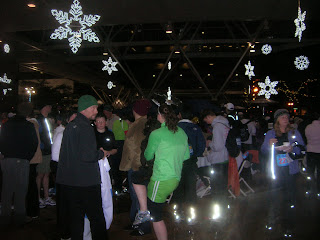 Dancing in the streets... or at least on the curb...
Summary: Despite my best intentions, I went out too fast at the start (it was either go fast or go under -- the crowd was packed tightly together and even the people dressed as walkers for some reason started out at a run). I ended up getting winded and walking a lot more than I'd planned, which is discouraging. Nevertheless, my calf muscles are sore today, so I must have gotten something of a workout. I think my sour mood today is based partly on the lack of sleep. I went to bed after four, and the dog got me up early because she needed to use the facilities. You'd think a dog that smart would've worked out how to let herself out.
Posted by The Merry at 1/01/2010 11:39:00 AM

I'm glad to hear that you made it home. I like the National Anthem being sung on New Year's. It might catch on.

Good for you to get out and do the 5K. Now you can try one in the daytime!

filin- the person who lets the dog out when you are too tired.

What a wild time! Congratulations on finishing your 5K - that is an awesome achievement!!!

Congrats! This was a big accomplishment. Make sure you celebrate it properly.......then do another!

I have a friend, Vanessa, she's 40, who runs 5 miles in her lunchbreak Monday to Thursday every week without fail. She runs 5k races for a running club and averages 17m 23s in her last few races. The last time I ran a 5k I did 15m 38s but the winner was over the line in 14m 10s. Vanessa runs three Halfs and one Full a year. I think she's bonkers.

Well done, Merry!! It's hard not to go out to fast in a race, but remember you did it! Your first 5k!! It definitely sounds like a New Years that you will remember.

Jingsnes: a happy feeling of accomplishment.

And really? SELLING bottled water at a race?Crazy.

Congrats Merry!! So proud of you :)

Merry - congratulations!! Good for you!! I hope your stomach feels better...

And I sympathize about the dog getting you up - mine do the same thing.

morsh - what you grumble when the dog gets you up.

For your next investment, may I suggest a large doggie door?

Glad it wasn't any colder.

Many congratulations! I hope that you're feeling better.

What an impressive way to begin the New Year.