Word of the day: thwarted

Thwarted sums up the day I had yesterday. People think a tech writer spends her day writing. Ha. Most of the time you are a detective, trying to put together all the pieces of a jigsaw by asking questions of people who only know how their own piece works.


Site du jour: My Marrakesh tells a tale in photos about shopping in Kabul. If you want to talk about people being thwarted, there's a good place for the discussion. And yet, what beautiful things they can create!

Exercise du jour: Jog 2 miles. Hopefully, around the Nike campus, which has a nice soft trail and people don't scoff if they see a fat chick running trudging.

Update du 7:58 am: Ha. Got up early this morning, jumped out of bed and laced up the running shoes. I was going to do a quick (well, for me) two miles around the neighborhood. Then I sat down to read all your blogs. Now it's too late to jog before work. And since I'm running late because I was catching up on your doings, it's clearly all your fault that I'm not getting the jog done first thing. I hope you feel guilty. A little.

Update du 8:10 am: Remember those guys with the bulldozers? They're back. Yes, I know this has been going on for months now. I think they've been having problems with the work they did and they're having to re-do it all.

The road is completely blocked in both directions. 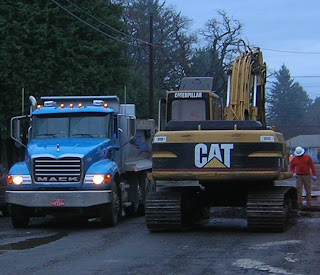 If you're keeping track, this is now the fourth time since October that they've dug up the street in front of the house. Wait -- I think it's actually the fifth. 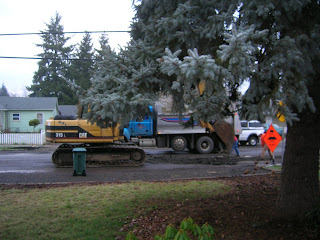 God really wants me to walk to the Max today.

Done! In broad daylight, I ran jogged. 2 miles. And God threw in some uphill sections of the trail, which for some reason were a lot steeper than they'd been when I walked them. Plus, walked 4 miles, thanks to God and the Water Department.
Posted by The Merry at 1/26/2010 05:35:00 AM

Labels: b is for bureaucracy, Hal Higdon, running, whining

I do that too - get so wrapped up in reading blogs that I don't get stuff done. But usually I'm INSPIRED to do things, anyway!

Shelley, you're right of course. For example, it really does help to see how far you've come!

Wow, I've heard of mysterious ways, but that's a new one. Still, best not to mess with the grand design.

flist: It's that list you have, you know the one, the one with all those people you want to use THAT word on.

So your blog friends thwart you, and God intervenes.

I've always said any Creator Who could come up with the platypus and ostrich must have a great sense of humor.