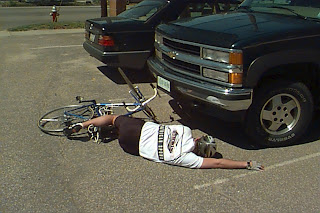 To review: It's Monday, and I'm still alive, no thanks to the bitch in the red sedan who's unclear on the concept of a red light.

Honestly, if you commute by bicycle you get used to people Not Seeing You. A couple of cyclists have been killed in Portland this month by people who simply forgot they were there (i.e. they passed the bicyclist then turned right, directly in front of them). That's stupid, criminally stupid if you will, but it's still easier to accept than the other kind of asshole driver.

The sort who sees you coming, looks you right in the eye, and still comes on toward you as if life were a game of chicken and you were supposed to magically leap 20 feet in the air to get out of their way.

Don't, please don't leave comments about idiot cyclists who run red lights or otherwise behave like idiots. It's not the same thing. Yes, some cyclists are morons and yes, in this instance I had a green light, the motorist had a red light, but frankly that's not the point.

The point, to me, is that another human being can be so removed from all humanity as to look you in the eye and still see you as some sort of insect that can be removed from existence. I resent the thought that someone would be willing to swat me like a fly and then continue on with their evening.

I'm totally with you Angstriddengoddess. Why do car drivers believe they own the road? No-one else is allowed on it. Why can't they wait the 30 seconds it takes me to get out the way before honking their horn and swearing violently at me?

Why have they run my partner off the road three times in the last year?

But I must say, here in Sydney, all the measures to encourage cycling are astoundingly half-arsed. In my local area, they're busy painting cycle laneways on most of the roads. Just next to the parked cars, so you have to violently swerve out in front of traffic when someone opens their car doors. It's such a token measure.

All I'm trying to do is get around in a healthy and sustainable way.

There are too many jerks driving vehicles. Have you considered wearing a suit of armor?

God, I hate to hear this.

Even though I have a bike (well, now it's really a non-functional hunk of metal with two flat tires and a lot of fixing up needed) I don't ride it in traffic anymore because it's too darn scary. And so, because there are so few dedicated bike paths, I got out of the habit of riding at all.

I agree--the worst are the people who look right at you and keep going anyway.

Mary!! Glad to hear you are okay. There is something about being inside a big metal box on wheels that makes people feel invulnerable. And that's the reason for their attitude. It's not what they could do, but what they feel safe from. Now if so much as side-swiping a cyclist resulted in damage to their paint job, they might be more careful. Personally, bike riders scare the spit out of me. I liken driving behind a biker to driving an obstacle course set with eggs. I am going to move out of any conceivable path they might cross at the soonest possible moment.

This is why I am both afraid to drive and ride my bike in the big city.

Glad you're in one piece.

How scary, and infuriating. It's hard to imagine what in the hell she was thinking. I've almost gotten hit while riding my bike to/from school a few times, too. In my case it wasn't as deliberate as yours. (someone opened their car door and almost hit me and another time a driver suddenly changed their mind and made a quick turn.)

I'm glad you are ok. Take a hot bath, settle by the fire with a hot cup of tea and relax! :)

hey here in chicago, cyclists rule the road! you should come out here.

Im glad you are ok!

Ugh, I feel your pain. Glad you are ok! I'm still terrified to get out on the roads here in Atlanta, I'm sticking to the path for now.

My husband commutes on his bike a lot, and it really scares me. Some drivers don't just think cars own the road, they think THEY PERSONALLY own the road! Some people just turn into total a**holes when they get behind the wheel.
(Just this morning a cyclist was hit by a car just down the street.)

Thank you for the support. Portland is actually one of the best cities around for bicycling, but even here there are some jerks.

It's funny, the last major altercation I had with a car was at that same intersection. A driver was yelling at me, wanting me to get out of the bike lane so he could drive in it. The driver in the car next to him rolled down her window and told him off. Not many places where that sort of thing would happen, but I loved it!

Haven't ridden a bicycle since just before I gave birth to DD34. Long time.

It makes me nervous to share the road with a cyclist, and in LA & area, there are lots. They specially like to ride through Topanga Canyon, which is mostly a two-lane, winding mountainous road.

Cities/counties should wise up and build dedicated bike paths. It's just not safe for bikes and cars to share streets. Note reference to opening car doors, above.

Like the others, I'm glad you are okay. Very glad. At least my 3 seconds of stupid was my OWN stupid. Would hate to be so injured by 3 seconds of someone else's stupid.

Glad you are ok. There are so many *ssholes out there on the road I had to give up biking into work - it just wasn't worth risking my life everyday. My boyfriend got hit walking across a street last week. He is a big guy and the driver looked right at him before knocking him down with his big pick up truck. WTF is wrong with people? Be safe out there.