Better than a mood ring 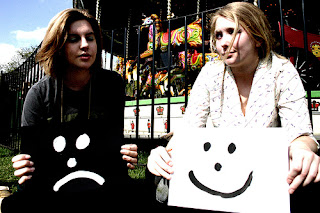 I can clearly tell the difference between the tone when I’ve written the post before I worked out versus after the workout. For one thing, the “after” blogs are much more smug in tone. (Is afterjog similar to afterglow? Sounds more like some kind of cheap aftershave.) The “before” posts, on the other hand, always seem much less confident.

I knew a girl in college who always went for a long run right before an important exam. She’d show up in her grubby sweaty clothes, without even taking a shower first (this was apparently very important; she was superstitious about it) and take the exam still slightly out of breath. I don’t remember if she really did all that much better at the exams than I did, but she clearly thought it made a difference. I just remember that I always made sure that I kept a few seats away from her on exam day. 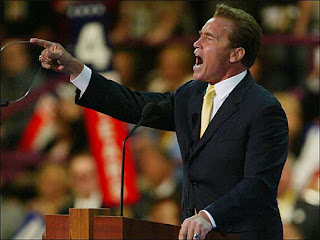 Was there supposed to be a point to that story? I think I meant it to illustrate how exercising can add to your self-confidence. I'm too lazy to actually check, but I imagine studies will prove that people who exercise are -- on average -- more confident than people who don't. (Well, that's one explanation for the Governator.)

I think it's helpful to note here how I feel before and after I exercise. That way I can look at the before/after word pictures the next time I'm trying to persuade myself to get out there and exercise.

I totally agree about the self confidence boost--but alas, for me it's temporary. Don't know how to keep it going once the endorphins (or whatever) wear off. But if they could bottle it, I'd sure pour some in my coffee every morning.

Ha! That's funny. Maybe that's my problem. I got accused of reading too many of Lord Byron's poems last week (I blogged about it today) because of my arrogance in the classroom. It wasn't arrogance; it's self- confidence. And it's not Byron; it's the running! :))

That is a great post because its important that you have realized how you feel afterwards and you just need to hold on to that feeling all of the time and remember it on those days you dont feel like running or you dont feel confident.