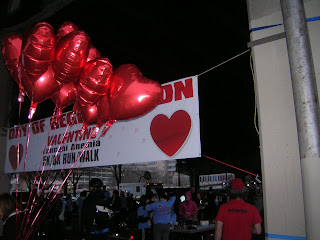 Quote du jour: Many of life's failures are people who did not realize how close they were to success when they gave up. -- Thomas Edison

I almost didn't get out of bed this morning.

Friday, I had the worst running experience in the history of creation, since the dawn of time, since Homo sapiens first got the idea about walking on two legs. It stunk. Everything that possibly could hurt did hurt. I couldn't walk without limping. (I don't think this was entirely the fault of the run. The asthma attack made it hard to exercise, and getting drenched to the skin on the way to the track might have had something to do with things like muscles cramping up on me.)

Yesterday, I was still limping. I started doing serious ibuprofen and applying the ice pack, but even lying in bed I couldn't lie on the side that had the nasty leg pain just below the hip. I thought I was totally screwed; there was no way I'd be able to get up and jog a whole entire 5k.

Then I thought, well what if I could do it after all? Maybe the pain will let up and I'll be able to run. I'll never know unless I go down there and try. In the end, it was curiosity that got me out of my warm bed and sent me out into the cold, rainy pre-dawn morning. 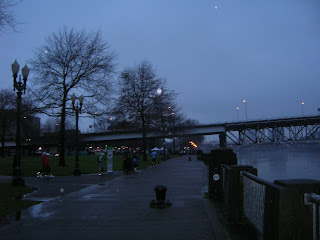 Looks like other people had the same idea
I indulged in a whole lot of internal lying self-talk: 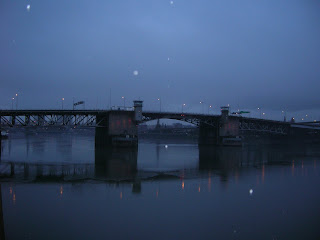 Either the sky above Portland suddenly developed a whole lot of additional moons, or the rain drops on my lens were causing some neat special effects.

The odd thing was -- well, there were a couple of odd things. For one, I wasn't worried about what anyone else would think about me jogging along red faced and slow. There were so many people around that I didn't feel as if anyone had time to stare at me. Besides, I was too busy making promises to my body to worry about what anyone else thought of it. (Though I did worry that my wheezing, that last mile, was getting so loud that it might scare somebody.)

The other thing that surprised me was the fact that I kept going. I did take a couple walking breaks -- when the wheezing got too bad, I had to use the inhaler -- but then I went back to jogging.

The first time I tried to run a 5k, back in January, I found it hard to keep going after the initial rush. This time, though I'm still going out too fast, it seemed natural to be jogging. I'd found a rhythm and it was easier to stick with it than to walk. I'd been trailing a couple people for the first half of the 5k, but in the second half I passed them and kept on going. That I put down to doing the couch to 5k. It wasn't grit or determination that kept me jogging, it was habit. (I don't think I was going any faster; I think the other people slowed down.)

Good stuff, Merry!! I've noticed on blogs, not saying it's you, but I get all worried when I read what happens to folks. Then I find out they were exaggerating. So the caring me says, you shouldn't be running with all these problems, unless you are exaggerating them and making this doctor worry about you needlessly.

I might have been exaggerating about it being the worst run since the dawn of time. It was just the worst run I've ever had.
I'm not sure why everything hurt on Friday, but I've been doing ice and ibuprofen steadily since then, and I think everything is getting better. What causes inflammation in the first place?

Congratulations on talking yourself through and completing the race!!!

Congratulations!!!! Here's to us NW girls kickin ass and taking names (or is is kickin names and taking ass???)

Merry, you are the master of self-delusion, but in that good way! Great job on the run!

I think of it more as a mistress of self-procrastination. All of the above-mentioned pains are still paining me, but I'm assiduously icing and ibuprofening them and keeping the angst at bay :)

So funny how the mind seems to be the thing that needs *training* over our physical training. Great job! woo-hoo!

Congratulations! Sounds like you ran a great race! And you talking your body parts out of pain is awesome - will you run with me and talk to my shins please? I think they'd listen to you better:)

as a woman trying to find her love of the run Ive learned for me it is indeed 80% mental.

Mind over matter (or all those nagging roadblocks that jump in the way to deter us from accomplishing a goal)!

I ice down after I run every day!

Congrats on accomplishing your goal! It would've been better had it not caused you such pain, but the bottom line is that you finished what you started! Kudos!

Wow, your determination is so impressive--with all that pain I would have quit before even gettting out of bed in the morning!

Getting up and out of bed is the bulk of the battle. Congrats on a huge victory!