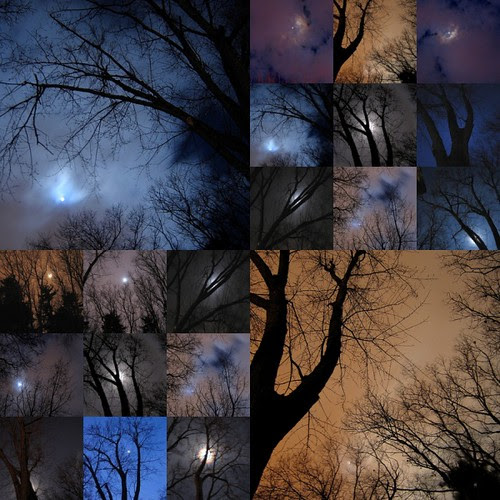 Went to see New Moon the other night. The title appears on the screen one letter at a time. For a moment, the title read "Ew Moon." I'm afraid that was a subliminal message.

At one point I saw my friend, an admitted Twi-hard, checking her watch. As soon as the first credit appeared on the screen, a woman* in the row behind me said "That was terrible." A woman in the row in front of me said, "I should've waited a few months and picked this up out of the $1 bin."

I didn't think it was all bad, though it's never a good sign when a movie has unintentionally funny scenes (Bella and Edward running through the woods). It also had some nice if gratuitous abs. But I wouldn't recommend paying to see it in a theater.

Then again, I now hate watching movies in a theater. I want to get up, move around, stretch a bit, do something, rather than sit still for two hours.

Besides, I tend to make fun of any phenomenon that has tons of rabid fans because I have a death wish an instinctive dislike of anything that tends to attract hordes of screaming fans.
Well, except the Beatles.

Then again, again, a better review would be: New Moon: the LolCats review.


*Most of the audience was made up of women in the 20s and 30s. Very few teenagers.

Done. Sorta. Okay, actually it would be more accurate to say 'half done' because I only did half the scheduled jogging. But on the other hand, I just spent two whole solid friggin' hours (and 14 minutes) on the phone with my mother trying to figure out why her all-in-one printer-scanner-WonderMachine wasn't working. And I think I deserve some kind of damn medal for that, so I'm putting the star up and don't you look at me like that, you'd've done the same. So there.

That LOL Cats review was awesome! Not that I've read/seen New Moon. I did read Twilight a couple of years ago and was not impressed. Have not felt the need to read the rest of the books or watch any of the movies.

I did, however, pick up a copy of the new Harry Potter movie as soon as it came out on DVD this week. And I saw it in the theater and I have all the books. Sometimes I get on board with the mania.

I think the LOLCats summed it up pretty well. Especially the moping all over the place :)

I'll have to check out the HP movie on DVD. While using the treadmill ;)

Loved the lolcat reenactment! And now I don't have to even think about seeing the movie.

I've gotten so I hate going out to movies anyway, would rather see them at home where I don't have to hear other people chatting or smell their heads to see the screen.

Heh...I heard this film was a stinker. Honestly, it's the worst book of them so it could only go badly :)

The coldest it's been when I've run has been 10 degrees! I had ice on my face by time that crap was over! When I was in med. school in the N. E. it was the mechanical problems with ice and snow that stopped me, never the cold. Do you have a treadmill? If not, why don't you get one and just watch TV while walking an hour on it most days? Walking fast is a good workout.

We reviewed it here: http://thisrealitypodcast.com/?p=531

The Lolcats reviewed it funnier than we did though.

I haven't read any of the books or seen the movies, so I will be sure to skip this one, too.

The Beatles are worth it, though, unless you happen to be married to a guy to has to have all of the (very expensive) gear to outfit the band.

I have friends here who went to New Moon tonight - for the 5th time. It's ridic. I hated the books and refuse to see the movie - they think I'm a grinch. So thank you for the validation!!

Dear Lord! I truly cannot imagine anyone seeing that film five times. It's really mopey, with tons of violins playing in the background. Five times???
No, you're not a grinch. You're discerning.