In praise of imaginary friends 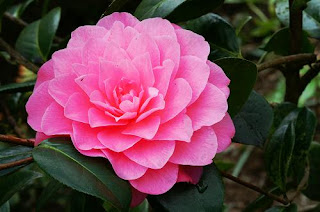 The charities that soothe and heal and bless
Are scattered at the feet of man like flowers.
- Wordsworth


A dazzling array of runners and losers. That was what I was originally going to title this post.

I started this post a few weeks ago and wrote mostly about the bloggers that I've been reading, cheering, and laughing with as they struggle to achieve or maintain fitness and a healthy weight. Then I stopped writing the post, because that ever-psychic and always entertaining Crabby McSlacker had written an even better post on the same subject. Tonight, however, I feel impelled to publish this post anyway. You'll see why.

My reason for starting this blog was not an original one, but it worked for me: I wanted to lose weight. The best way (for me) to do this is go public. I could either find an exercise buddy or post my struggles/successes on the web for all to see/snicker at. Since I moved up to Oregon, I haven't found anyone who is both a) at my level of unfitness and b)willing to change. So I'm going for the blog.

It has helped. For example, once I publish this post, I'm going to go do a session of Pilates. I have to. I made a deal with Heather from Setting her free, that if I did Pilates, she would go do a session of Yoga. And she said she loves a challenge. So I'm stuck. I have to follow through, or feel like a liar and/or wimp. The hell with that. Pilates, here I come.

I’ve trying to keep myself mentally psyched by reading blogs by all the crazed fanatical runners out there in Blogland.

To name a few:

Half-fast keeps up a running commentary about training, races, the evil that lurks in the hearts of treadmills, how running has made him a sex object for all the women out there, etc. I believe every word, naturally.

grrrl power writes about balancing jogging and eating them green leafy things with surviving the road to the Ph.D

When I’m feeling discouraged about my shape, I go check out the photos on mousaroo’s mumblings and read her Good, Bad, Ugly summaries.

Christina from Diggin' it and Theresa from Moderately Interesting are two CBs (see below) who are both just starting to get back into that running/fitness thing. I find it incredibly encouraging to follow their progress, even if it's only from afar.

And Heather from Ad Astra, per aspera always challenges me to go a little bit farther than I thought I could.

The fitness blogs are a bit confusing when they speak in code. To me, split is a word that follows “banana,” and why say you’ve run two “halfs”? Shouldn't that be "halves"? And doesn’t that mean you’ve run one whole whatever-it-is?

Oh, while I’m on a roll, I should mention the weight loss blogs that, while not strictly about running, encourage me to keep going:

Editing my body is always encouraging, because Katharine doesn’t let anything stop her from following her plan of exercising and eating right. Somehow she doesn’t seem to get derailed by Life. I’m jealous, and hope it will rub off by on me if I follow her blog.

Desperately seeking serenity is encouraging to read because Moana has already lost several pounds following Weight Watchers, even before she started to exercise.

Half of me is amazing. Pasta Queen’s managed to lose over 200 pounds by following a simple plan of eating healthy stuff and exercising. First just walking, then walking/running, now she’s worked her way up to running races. Plus, it’s fun to look at her photos and spin them around 360 degrees. (She doesn’t seem to get dizzy.)

There are more wonderful blogs like these. These are just a few of the blogs I've been following. (I've tried to link to them all on my random rotating blog roll on the right.)

I like surrounding myself with positive people who aren’t slackers comme moi. I’m pretty sure that this will help me stay focused on achieving my goal. It Can Be Done.

This was originally where I'd stopped the post. But I have things that need to be said, and they need to be said publicly. So this is where I'm saying them.

The blog at the CB Bar & Grill is not fascinating, at least not to an outsider. It's full of quirky people who enjoy the same jokes and most of the same books while leading fairly disparate lives. I've never met most of these people in person, but -- this is going to sound really strange -- I've formed a bond of trust with them. I've asked them to send me an autographed book and they do, trusting that I'll send them the money back in return. That makes no sense to someone outside, but because I've known these people (and I do feel like I know them), it works. I've traveled a distance of several hours to meet up with some of them, and when we meet it's like we've known each other for years even though we've never met. Say what you will about introverted loners who prefer to interact via the Internet, there are some powerful emotional bonds formed. Which brings me to the reason for this post.

Tonight I learned that I lost a friend. This was a woman I'd met over a year ago. We had similar taste in books, enjoyed similar jokes. She was only a few years older than I was, and though she lived three thousand miles away, we kept in touch through a group blog, and enjoyed each other's comments.

Funny thing about the Internet. It can reveal you in ways you're not aware (often simply by the way you write you reveal yourself to people) but it can also conceal little trivial details, such as cancer. It wasn't until I'd known Margaret for a few months that I realized how hard she was fighting to stay alive. She usually made a joke out of her troubles, but when you considered her situation stripped of all humor and sense of proportion, she was fighting an opponent who takes no prisoners.

And when she lost the battle, a lot of people lost a friend.

Margaret was so young! I'm sorry, Mary, that your friend lost her battle. But I'm very glad you're here.

Hugs from me to you.

Thank you, Mary. I didn't have the words to express my admiration and sense of loss for Margaret, but you did. Thank you for expressing what I could not.

I am so sorry about your friend. Its sad because nowadays, just about every person knows at least 1 person who has cancer.

Great job with the pilates! I feel the same way, if you hadnt made that deal with me, I never would have done it yesterday cuz I had a shitty day as well. But Im glad you challenged me!

Mary, you never fail to challenge me and help me rise to be better - at whatever it is. Because of your blog, I've made a stronger effort to keep fit. I actually jogged along my walk the other day!

The loss of Margaret to our group is inconsolable. Thank you for writing such an articulate memoriam to her.
CMS

I came to blog about my battles with weight loss and ended up finding irreplaceable friends - who knew?

I'll be sure to say a prayer for you and your friend Margaret.

Mary- very nicely said- thank you for putting it out there for so many of us who are just sitting here stunned.

I'm so sorry to learn about your friend, Margaret. While reading her blog I recognized many of the same issues my Mom had towards the end of her struggle with cancer. My heart goes out to you and to Margaret's family. Thanks for sharing.

So sorry to hear about your friend; so sad.

And like you, I'm constantly amazed at the wonderful people one meets online. I'm with Vanilla--they're real, not imaginary friendships.

(Oh, and doing shout-outs to blog friends is always appropriate; what I did was STEAL from all my blog friends, which was way less classy than your tribute).

These are all great comments, thanks.
I should have been more clear. I don't think the friendships are imaginary. People who are non-bloggers, not really Internet-fixated humans, tend to refer to the humans that you met online as "your imaginary Internet friends."
But they think we're all fairly crazy, so you're right, Vanilla. (Maybe they're right too, but I refuse to admit it. :)

I haven't really been able to find the words for how I feel. What to say? But your words and those of the other CB are managing to express what is in my heart. Thank you.

As for the motivation, it works both ways. You have inspired me. If I can be a source of even a smidge of encouragement back, I am glad.