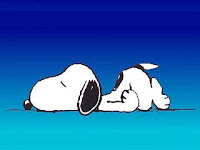 I hate when cliché's come true. They used to say that if you go out in the rain you'll catch cold. I always thought that was hogwash, but I went running yesterday and got sprinkled on, and yes, I came down with a cold later that day.


Coincidence? Or is running bad for you after all?

I've been a good girl today; I went and got my free credit report at www.annualcreditreport.com. If you're a USian, try checking out your credit report with this site. I've finally convinced Experian that I did not open a Macy's card two years before I was born, but they are stubbornly clinging to the possibility that I did open a Sears charge account when I was 7 days old. After all, I was alive at the time, so it's possible.

I was going to do a summary-of-the-month post, but I'm going to postpone it until tomorrow. "I have a cold," she whimpered. "I have to baby pamper myself."

Nah, going running in the rain didn't bring on your cold. All of those nasty germs were already in the process of trouncing your immune system by the time you went running. It's only now that they've gotten powerful enough to lay you low. Virtual hot tea is now glugging its way through teh Internets, from me to you, for your comfort.

P.S. You may nag me when you're feeling better. I let work get in the way of exercising this morning. :-(

Bummer about the cold.

I gotta agree with Katharine--going out in the rain probably wasn't the reason.

On the bright side, just think of all the fun sneezing you'll be doing!

Poor Baby! But relief is on the way. I found this too late to do me any good, but maybe it will help you ...

aw sorry you are sick! That is no fun at all. its ironic that you could be out doing something healthy like running and then get sick which is not healthy! Go figure.

I am a "U.Sian" as you put it and I always have to pay for my credit reports. I will have to check that out.

Y'know, it's funny. I'd heard all about how a hot toddy was supposed to help if you had a cold, and I'd always scoffed. Yeah right, throw enough whiskey in and you'll feel no pain. But it does seem to help. Even if it was an illusion, it was a comforting illusion.

And I swear I won't look at these comment while I'm at work. I'll be good. I can't respond, since Big Multinational Corporation frowns upon people blogging during worktime, but I do peek at the emails. And alas I read Crabby's sneeze comment and nearly laughed out loud. That would have been bad -- I was in the middle of a Solemn Important Phone Conference with a lot of vice presidents (no, not Cheney).

p.s. The sneeze comment was a reference to this diablog that I wrote with Crabby:
Random Friday

Nunhead Mum of One said...

Running is clearly bad for you Mary (a very festive name, don't change it until the New Year)....all that inhaling fresh air woke all your germs up and got them up and doing their stuff....suffocate them with your hot toddy (very yummy and I add a pinch of cinnamon to mine) and sweat them out overnight. sounds extremely gross I know but it works for me....you can always wash your bedding and air your mattress, pillows and duvet in the morning

For USians who don't know (like Heather), we are entitled to one free credit report annually from each of the three agencies-that is three free reports each year. So if you get one every four months, you can pretty much stay on top of your credit for free.

Nyquel. Because if you can't get a good night sleep, it takes longer to recover. And spicy food during the day to help clear your sinuses. And lots of water.

Of course, Nyquel always give me really, funky strange dreams.

Don't forget nasal lavage. It ain't pretty and it ain't fun, but docs swear by it and so do I. It even works for me during hay-fever season, and my sinuses' inability to clear themselves on their own is legendary among local docs.

Thanks for the sympathy and support. I'm feeling much better. It still seems crazy, but that hot toddy idea definitely helped. And I will definitely try to think about the lavage next time, Katharine. Doesn't sound nearly as much fun, but it's probably much better for my liver :)