I love looking at leaves I don't have to rake 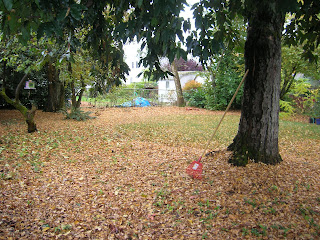 (Alas, these are leaves I do have to rake)
Quote du jour: How beautifully leaves grow old. How full of light and color are their last days.
- John Burroughs


Video clip du jour: There's a website hosting a Dance Your Dissertation contest. No, it's not for people getting a Ph.D in Interpretive Dance. It's for people in the sciences. No wonder it's so hard for people to finish a Ph.D if they know they're going to be critiqued for the ability to do the Rumba while defending their research. Oi.

This is last year's winner. Maureen McKeague did an interpretive dance on "Selection of a DNA aptamer for homocysteine using Systematic Evolution of Ligands by Exponential Enrichment."


Y'know, if people are creative enough to think up things like that, I should be able to figure out how to organize my life.

I've more than doubled my commute, spending more than 2 hours a day commuting. I know that's not a big deal to some people, but it's causing me to have to re-figure my day. I don't have time to spare if I want to exercise and eat and sleep as well as that work stuff.

While I can't... yet... cycle to work (it's 30 miles one way), I can save much money by taking the local light rail. And the second half of the train trip actually has free WiFi, which is totally awesome. I love the idea of checking my mail, getting in touch with people, while whizzing through the countryside.

If I play this right, I will be able to organize my time so that I can get a lot of dull-but-necessary stuff done during the commute. Maybe. And if I can force myself to get up from my desk and walk at lunch, that could work too.

Originally I'd planned to walk from the train to work, which would add three miles to my daily commute. But I'm rethinking that idea, at least for now. It would involve walking along busy streets in the dark. No sidewalk, few streetlights, sharing the shoulder with bicyclists. I might hold off on that. There is a shuttle that takes me from the train to within ten feet of my building's front door. Hard to argue with that. Plus, I get to admire the beautiful fall countryside on my way to work.

Exercise du jour: Again, I'm going to go for the 15 minutes ellipticalling, and a 2 mile walk at lunch. No interpretive dance for me.

Continue to tweak it, and your day will fall into place. Once you build up to it, could you ride your bike partway to a train/shuttle station?

Holy Moly! Perhaps they should start a new show called Dancing with DNA!

Reminds me of a story a co-worker told me... his kids all went to the Waldorf School, where they did interpretive dance etc... So one day his youngest son was doing some sort of slow motion ballet like movements in the living room. He's getting all sentimental at what a sensitive child he has... so he asks the kid about his "interpretive dance." To which little Leo replies... "No Dad! It's slow motion replay football. See... he goes out for the pass... he leaps... he makes an incredible catch... he gets both feet inbound... the crowd goes wild..."

So much for the sensitive child theory!

And BTW - just think of how many calories can be burned while raking leaves... I'm trying to look at painting the garage that way!

p.s. - I'm pretty sure I would go postal if I had a 2 hour daily commute - I think light rail is definitely the way to go, because 30 miles each way would be brutal! My longest ride so far is 34 miles - it took 3 hours and I could barely move for several days afterwards!

In my dreams, the trains not only have free WiFi, but fresh coffee in the mornings and a wine steward on the evening run. Wistful sigh.
And 34 miles is a great ride!

MessyM, I did find some bicycle lockers on my lunchtime walk; maybe they'd let me use one sometime. It's possible.

I know some people do long commutes and aren't bothered by it but I would hate it. If you can take the train and have internet that would make it more tolerable though.