If it's Friday, there must be bulldozers

Oh for heaven’s sake. Déjà vu all over again. 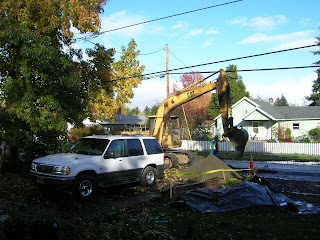 Not only a pile of gravel and a deep channel across the road, but a bulldozer actively digging right behind my car. 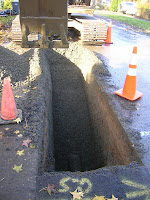 This time I took a lot more pictures. I mean, I can get away once with telling the boss that I’m late for work because there’s construction in front of my house. It sounds a lot less convincing the second time, especially since it means I'm going to be running late two Fridays in a row, haha, yes that is an odd coincidence boss, haha.

I really think it wouldn’t hurt if these guys gave a little notice, like a note on my door the night before? It would only have to be a very little note. And also some advance notice when they’re planning on turning the water off. Would that be too much to ask?

When I went out to take pictures, I probably looked a little irate. At least, I think that was why the construction worker took one look at me and decided to turn on the charm. "Hi there!" He had quite a nice smile, I must admit.

I told him I was taking a picture so my boss would believe me.

He said it would be more convincing if he were standing next to the bulldozer, holding his shovel “like they did on Green Acres,” just so the boss knew actual work was in progress. 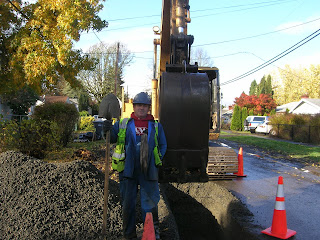 As he promised, they were done by the end of the day. I still have running water, so there's a victory. I've also got a lawn full of deep holes, but on the plus side there's a whole lot of brand new gravel on my parking strip. Plus I got smiled at by a friendly guy, which is nothing to sneeze at.

CC, you would've liked this guy. No movie star, but definitely in possession of a Quite Like-able quality :)

(Google wants me to spell that work likable, but that looks wrong somehow. To me, at least.)

Woo hoo. Nice pecs, I mean pics. Merry did the rest of the neighborhood get construction workers or are you the only lucky one.

About M'Lady's sweater. Maybe it wasn't her color. She has standards you know.

After we had the hurricanes a few years ago, the chain saws ran 12 hours a day for a while as we cleaned up all the debris! I was really glad when that stopped!
Also was happy to put MY chain saw away without cutting off any useful body parts :-)

And won't it be awkward when the guy finally finds the source of the blockage they've been sent to fix and straightens and turns to his buddies and says, "Hey, look at this! I think I found the problem." And he's holding up a tangled mangled mass of -- blue yarn. "Now why would anyone flush a sweater down the toilet?"

uncects: they've been known to dwell in sewer systems

Oh dear. I can imagine her doing something like that. And then looking up with those innocent brown eyes, drat her.