This is the true joy in life, the being used for a purpose recognized by yourself as a mighty one; the being thoroughly worn out before you are thrown on the scrap heap; the being a force of nature instead of a feverish little clod of ailments and grievances, complaining that the world will not devote itself to making you happy.

Goal of the month: Still going strong with the vegetarian stuff. Oddly enough, I don't miss what I'm not eating. Doesn't seem to be slowing down the exercise either. (Dear Lord, please don't let that become one of the self-fulfilling prophecies.)

Another goal that I haven't blogged much about is the goal to get out, to stop being such a home-bound hermit. Thanks to Julie and Glynis, I got to fraternize with Imaginary Internet Friends. It was great fun. Talked for hours, and the time went by quickly.

The only thing is... next time, I'm wearing snazzier shoes. 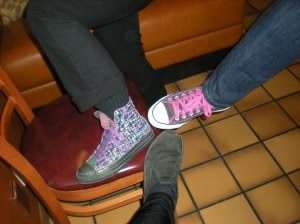 Guess which shoe is mine?
The perils that lurk in the heart of a restaurant salad

When I met up with the I.I.F.s at a restaurant, I thought I'd just order a vegetarian salad. Would you believe they didn't have one? It wasn't a big deal for me to remove the chicken, though I was surprised that the salad didn't just include chicken; chicken took up about half the salad, six or seven ounces. (In which case it should qualify as a Chicken Apple Cranberry salad, but I digress.)

What caught me by surprise were the glazed pecans. I always thought of a glaze as something that was found on the surface, but these nuts had been saturated in butter and brown sugar to the point where the plain nut had been turned into pure candy. I'd worry about a diabetic eating this salad.

Exercise du jour: 2.5 miles jogging. Slightly less mileage this time, so perchance will be a slightly faster pace? The goal is to slug-jog fast enough that I could actually pass a little old lady with a walker.

Well, sorta. The jury's out on whether this deserves a star or not. No, I didn't jog. It was too cold, and I knew what would happen if I tried. I did, however, walk 4 miles instead. So maybe I should put up half a star.

I have similar boring shoes. But at least my underwear is colorful.

I believe I have said too much...

Yes, boring shoes, have the same kind. But vibrant conversation made up for it, yes?

It was a close race but I was able to pass a slug once while running. I consider it a victory.

What was the thinking behind taking a photo of your shoes? Just wondering.

I didn't especially want to put up a picture that had my face in it. I know some people are good about posting before and after shots. Me, I just want to post after shots.

Since they wanted proof positive that all three of us were in one place at one time, the footwear shot was a compromise :)

I've never understood candy on salad. Much like I don't understand why you're wearing my fancy shoes. It's nice to know that you had a nice get together.

I have boring shoes, too. I make up for it with socks. (Today they are shark socks: the mouth of the shark - complete with teeth! - is the part you put your foot in. They are AWESOME.) :)

I like all 3 pair of shoes, and the reasoning behind taking the shot.

Salad should be salad, not dessert.

These are pretty much the only snazzy shoes I own, did several blog posts on their origins because the whole concept was so rare to me.
We DID have fun! I am really glad we could make it happen.
Sorry about the damn meat/candy salad thing though.
(Now that I know you want to get out more, I am going to pester you for another meet-up before June.)
Julie
(with the singlular pair of flashy high tops)