The combination of a weekend ending and having to face the thought of going back to work is hard to take. Especially on winter afternoons, when it gets dark so early. For some reason, that makes it seem like Monday's coming all that much sooner.

Anyway, that's my only explanation for the sudden impulse I gave in to: 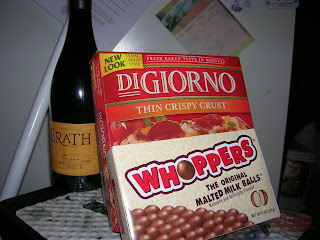 I don't even like frozen pizza. It's as if the imp of bad eating simply wanted me to buy something bad, anything. It was sick of me being good.

Funny thing is, I bought the stuff and took it home, then realized that I didn't want to actually eat it. The eyes and the taste buds conspired to convince me that they really, really needed this stuff. The stomach said "Hell no!"

So disaster averted. Maybe just the act of buying the stuff was enough to satiate the impulse, some kind of shopping therapy? I have no idea, but I'm not complaining about the money I spent. It's cheaper than a therapist.
Posted by The Merry at 1/16/2011 05:51:00 PM

sometimes I buy junk...like ice creams sandwhiches. And I let hubs eat all but one. And that ONE I save in the back of the freezer "just in case". That thing will stay in there MONTHS and months, but for some reason I just like knowing its there.

ok...after typing that out I feel like I must have some unresolved issues...onward and upward :)

Tricia, you've done a great job of wrestling with your issues. Maybe I shouldn't feel bad about this one.
It's just odd -- I've never done that kind of thing before. (Maybe because I've never gone three weeks being vegetarian? Yeah, that's a thought.)

Huh. Well, onward! Maybe you know a teenaged boy you can give the pizza to... : )

Sometimes, that "inner child" or whatever you want to call it, just needs to know a treat is available.

Glad your stomach had enough sense to say no.

Love, love love Bab5!!! And I remember and love the scene you quoted, too!

And good for you for realizing that you didn't really want it before you actually gave in! Disaster averted, indeed! :D