Ever hear the story of the famous actor* who was on his deathbed when someone said to him, "You're dying! It must be very hard for you to die."

"Hard?" murmured the famous actor. "No, dying is easy. It's comedy that's hard."


Well, my philosophy is that exercise is easy.

* Getting started exercising is hard.
* Finding time to exercise is tricky.
* Exercising when you're injured is hard (or downright stupid).
* Exercising in a gym when everyone around you is greyhound-thin and whippet-lithe is hard (and extremely discouraging).

But exercise? That's easy. Once you get going, that is. I do not understand why Brits wouldn't exercise even if their lives depended on it. (And I doubt this lethargy is limited to one country.)

Why should exercise be a drudgery instead of something fun? Is there no kind of exercise that appeals to you? 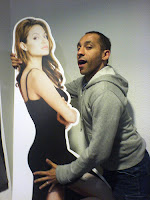 Okay, let me rephrase that. Any kind of appealing exercise that won't get your face slapped or cause a "laughable misunderstanding" with a bunch of unsympathetic bodyguards?

Didn't you enjoy exercise when you were a child? No, don't flash back to that nightmare of a PE class in 7th grade. I mean playing a game that involved running or climbing or ... well, or something. Exercise was fun sometimes, even if you weren't always good at it. Why don't people who "hate exercising" find something that they enjoy and then do it?

I think this is another of those things I'm not going to fathom.

Every morning I get on my bicycle and cycle off to work. Used to have the same argument with myself each morning, my inner slug presenting a number of Extremely Convincing reasons why I shouldn't ride in to work. I had several mornings weeks in a row when I drove the evilSUV in to work because I had simply spent too much time arguing with my inner slug. Finally, finally learned that the best way to actually get on the bike was to not think about it beforehand.

After cycling to work for several weeks, the body got into the habit of cycling instead of driving. I felt rather smug about that. Until the day that I had to drive to work instead of ride. The next morning I found myself facing the same arguments presented by the inner slug, and almost didn't make it into work.

Lessons learned:
Note: I have seen this opening quotation attributed to several different actors: Edmund Kean, Edwin Booth, Donald Woolfit, etc. This site gives several possible sources. (And does that guy in the picture up top have flabby biceps, or what?)

Sometimes I can get in a "just do it" mentality but other times the voice says "just screw it" instead. That's when I have to resort to trickery, bribes, and bargaining to get back out there. Good for you for gettin' back on that bike!

It's true that once it's a habit there's really nothing hard about it...but you break the habit and then it's like you have to start all over again. Unless your a little freak like me who simply enjoys working out. :)

Amanda, I'm impressed! Freak, hell. We should all have that problem :)
I'm more of the Cranky "ah, screw it" school of thought, so I have to try tricks and bargaining. Whatever works.