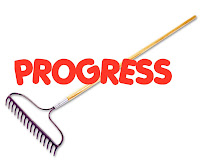 It's the end of the month, so I thought I should publish a progress report, some way to keep track of where I've been and where I'm going. A really cool organized person would put a chart up here to visually indicate progress. But we're dealing with me.

Note: Taking myself off the thyroid medication has caused me to lose ten pounds in the last month. Which sounds great, but leaves me where I was before I started taking the damn stuff. So really this is the start of my weight loss program. Still, feels good to say I've lost ten pounds in a month.

And The Mary should be happy! Good job!

Thanks Katharine! It is helpful to post up here publicly what I intend to do next. Keeping a New Year's resolution list in my desk drawer doesn't do any good. Posting it for anyone in the world to see might help keep me at it.

And I complain mightily about weight training, but I've been doing it for about fifteen years now. (I use the heaviest weights possible, but do only one set per exercise, 2-3 times a week and that usually means two). I can honestly say that despite all my bitching, it seems to make a big difference in my metabolism and I just Feel Better when I'm good about it).

And on a totally different topic, photos: (a discussion continued from my blog, sorry other readers)

There's a free stock photo site where i get a lot of stuff, though they love to try to steer you to their paid images. You still have to check the licensing agreements but usually you can just use them without attribution or linking, which is nice. (It's at http://www.sxc.hu/). I also sometimes stumble upon sites that have particular images I like that I ask permission to use. Every now and then I've been bad and used something that I couldn't find an email address to ask about that looked like it could possibly be public domain anyway, but then I've linked back and figured I'd take it down right away if they objected. But that's really rare.

Hi - I just stumbled onto your site from Fat Girl on a Bike and was reading that you took yourself off of your thyroid meds. Did you write an earlier post about this that you can point me to? Or if not, are you willing to talk about it, because I'm really interested.

That's a good point. I didn't want to bore people with the details, but if ever anyone else finds themself in a similar situation, it might be helpful to read someone else's experience.