Sometimes, it IS all about the bike (sorry Lance) 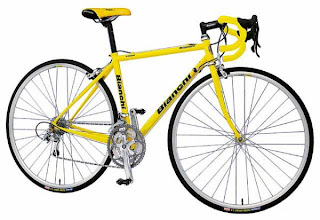 Quote du jour: The bicycle is just as good company as most husbands and, when it gets old and shabby, a woman can dispose of it and get a new one without shocking the entire community.
- Ann Strong, Minneapolis Tribune, 1895

I love my road bike. We're getting married next week.

Okay. That might be a slight exaggeration. We're just good friends.

I went for a bike ride, and it was great. In fact, it was a marvelous, quick, fun, kick ass bike ride. Without even thinking about it, I found myself actually zipping along at a decent rate of speed, and it felt good.

I'd had the idea in the back of my mind -- that dark and dusky area where the lazy, unexamined ideas hang out -- that my ponderous, plodding pace on the other bike was due to my body being so out of shape. Now, I'm rethinking that notion. This bike ride was fun again, like it used to be. I feel reborn, or at least a lot younger.

One reason I fell in love with cycling was how much faster I became. I've never been a swift runner. Hell, I even walk slow. But put me on a bicycle and I can pass the fastest runner. (Um... unless there's a steep uphill involved. Let's overlook little technical details like that.)

The next step is to take my heavy duty commute bike in to my local LBS and let them see if they can figure out the problem. I've been riding that bike for almost 10 years now. Maybe something is wrong with its innards. It hasn't had a tune up in a couple years. Probably something is screwed up. 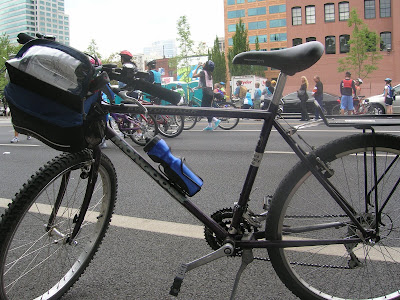 Much as I love my road bike, it's one drawback is the dainty little Italian tires. Reminds me of the story about the Princess and the Pea: these tires are so sensitive that I feel every bump. I don't like exposing these thin tires to all the glass, gravel, and general detritus on the commute route. Binchy is better suited to a long ride out in the country... once summer comes again... No, that's not me. But that's what I think riding should be like. Photo courtesy of JuanLuisFlicker.
Site du jour: Fat Cyclist has thoughtfully provided a guide to help the cyclist understand motorists' signals and hand gestures.

Before you decide to marry that bike I think you should know that I think I recognize it because I think I had sex with it more than once and it is a VERY freaky bike (the kind you DON'T take home to mother) and is, in fact, a bit of whoo-wer.

Which I appreciated about it at the time, but, hey, I'm not threatening to marry it.

Thought you should know.

I'm the first commenter, but I'm sure some of the commenters who follow me will, if they are HONEST, admit they did it with your bike.

I did not at the time realize your bike was a dude. So this does not make me gay. (Not that there's anything ... etc.)

Huh. My bicycle never said a word about any previous liaisons. Maybe you're thinking of two or three other bikes?
Meaningless tangent du jour: why do they refer to part of the wheel as a 'spoke' if in fact it never says anything?

Nope, no serious bike commitments here. In fact, not so much as a mild flirtation. Once, in younger years, I thought about it but that was just because everyone else was doing it. I am, however, just not that kind of girl at heart.

However, I sincerely hope that the two of you are very happy together. Well, it's not like you live in my neighborhood.

I think if I lived in your town, I'd be a biker. When I was there last month, I was stunned at the amount of bike lanes and just how bike-amenable it was!

You might marry your bike, I'm gonna marry Will Ferrell. Wonder which will happen first? ;)

The thing I hate about bikes is the seats. Uh, if I'm going to sit on that, at least buy me dinner first.

OoO! I want to come to the wedding!

I really want to get into cycling more this summer. I was getting into it a couple of years ago, but then my bike got stolen. Boo.

My problem with cycling was that i was always trying to do it with 4 kids biking behind me, which kind of puts a damper on things. Maybe now that they are all bigger and don't have to go everywhere mommy goes, i could rethink the bike thing.

Hey, spammers?
If you're going to leave spam, LEARN the basic rules of English grammar and PUNCTUATION, okay? Thanks.

Oooh you have inspired me! I have a bike in the garage (one of the kids left it here, and mostly he never rode it anyway). It is the prefect size for me because... it's a kid's bike! I will have it tuned up and take it out for a spin (as soon as the hail stops). Yay for us and our bikes!
Julie

I totally understand. I love my bike too. Maybe not enough to marry it, but we've got a connection for sure. ;)

I didn't have a tryst with your bike; I'm acyclist.

Where have you gone!?!

Um... would you believe me if I said Patagonia?

No? Okay, how 'bout somewhere less exotic, like work?

Penquin beat me to it, I was just going to ask that you maybe check in. We worry.
Julie
(Ack! Work.... bleh.)

Hey, Merry! I hope you are working less and have a mad case of spring fever and are taking full advantage of it. Take care! Gina

Hey, you left a comment on my blog......
if you want to know my thoughts on the whole Portland Velo/Longbottoms saga send me an email. kevin97116 "AT" yahoo

Thanks for stopping by. Good to see you around. I'll now stop bothering you via Jamie and let you get back to your honeymoon with your bike (was the ceremony lovely?).

And stop working so much (easier said than done).

I don't know why the last four comments were sent to the Moderation basement. Must have a word with Blogger about that!
Yeah, I need to post a post about why I haven't posted. No good excuses.

Just dropping by to say have a good Easter, Merry.