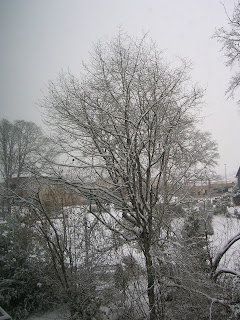 The good news about the move (besides the fact that once I get the fence fixed, I’ll get my dog back) is that I can go back to bicycling to work. It was getting so dark in the afternoon that I didn’t want to ride home. Now I can bike in and take the Max (lightrail) back. It’s nine miles to work from my new house, and it’s almost a straight run in – long stretches where I don’t have to slow down for cross streets. Once you get into a rhythm on the bicycle, it’s easy enough to continue; you can rack up some good mileage and get a good workout without too much hassle.
Posted by The Merry at 1/15/2008 09:29:00 PM

Asking for help is hard, isn't it? And those possessions do accumulate.

Thats so great about the biking thing. Sounds healthy and environmentally friendly and a great way to start or end the day.

We're hoping when we move to Provincetown that the bikes we bought, like ten years ago, that we've ridden maybe a dozen times total, will magically become more appealing. We'll see... perhaps you can be our inspiration.

Yes you can still make a resolution. The year is young yet. But good luck on cutting back on the possessions. Nature will always try to fill a void, remember? You get rid of one thing and two more will take its place. And then there's the concept of owning, which is psychologically more permanent, thus increasing the tendency to "nest" by accumulation.

You can do whatever you want, you're a CB. Traveling light is admirable. I'm working on it. Very little luck yet so far this year. I spend so much time on the memories associated that it takes forever to get rid a single thing. But I'm giving thought to the correlation between hoarding stuff and being overweight. Hence the new project.

If the Bag Lady were you, the fence would be top priority. Having the dog back will be wonderful!
Good luck with the resolution thing - if it works for you, perhaps you can give the Bag Lady some pointers....

Ive moved a lot and have learned that its too much for me to handle! I give you credit for being self reliant!

sounds like you have a great plan in place to keep up the exercise. good luck getting everything unpacked and in its place (when you find it!).

I think we hate to ask for help moving because you know you will have to help all of those people when they move and really, its such a dreadful thing to begin with...

I really downsized a few years ago when I moved to the UK and when we moved back to the States we had four suitcases and a dozen boxes. Now we are exploding out of a 1400 square foot house and 2 car garage...where does it all come from??? I swear, I'm going to start filling a garbage bag every week until its all gone.

At least all of those lifting and moving of boxes count as exercise and so do unpacking AND hopefully this will be home sweet home for quite a while!

Oh, I hate asking for help too. The worst thing in the world! Good luck with the purge and I hope your dog likes his new home.

Yes! I am going to be super efficient and get lots of good stuff done.
That's the plan, anyway.
Thank you!