Beavers in Beaverton? What's next, farms in Berkeley? 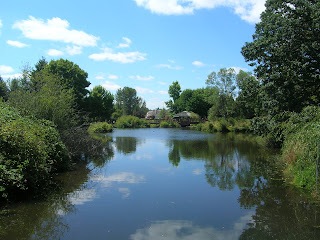 One thing I like about Oregon is its tendency toward hidden parks. 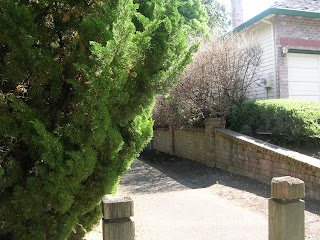 Behind the huge grocery store, a narrow path leads you past an apartment complex. If you walk between the tall, gloomy buildings, you find yourself on a pleasantly shaded walking path along a stream. 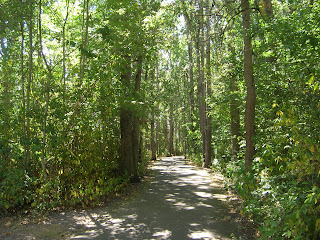 Follow the path down to the bridge over the small lake, and a horde of ducks make a beeline straight toward you. 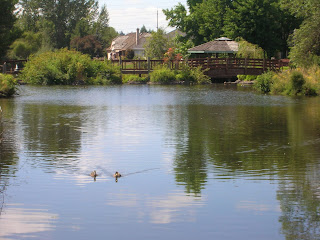 The other day, back when it was sunny and summery still, I took a walk there at lunchtime. It was a marvelous feeling to escape, even if only for an hour. The people-in-charge-of-parks had started to renovate the bridge, but they had to stop because they discovered beavers had built a dam there.

Couldn’t see the beavers, but it’s kinda cool to know that the original inhabitants haven’t been completely evicted by us newcomers.

Exercise du jour: Walking. Keep it simple and I might just make it.

The title explained: There used to be... maybe still is... a company called Berkeley Farms, who sold milk and had the slogan "Farms? In Berkeley?" It's hard to imagine any agriculture going on in a densely crowded city like that.
Posted by The Merry at 9/01/2010 06:33:00 AM

We actually have farms around here. There are even subdivisions technically outside the city limits, but surrounded by neighborhoods and shopping centers just a mile away, where people keep barn animals in their yards.

Enjoy your beavers, all we get are possoms, 'coons, squirrels, and nutria.

There are some pocket farms around here too. I think they're fun; you're driving past subdivision after identical subdivision, and suddenly there's a flock of sheep in a field. Some people hate them, say they lower property values. But since the farms were there first, I don't think they're lowering anything.

You're lucky to live in a place with hidden parks. I wish I could walk in a shaded area at lunch. All I get is a walk out in 100+ weather, in south Texas. And I'm usually a puddle by the time I get back to my desk. You'll make it.