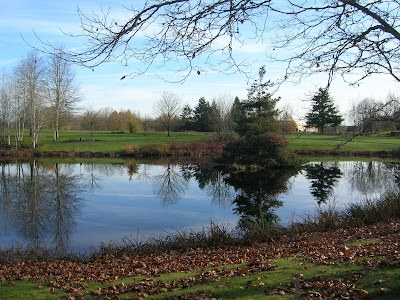 Shouldn't running in a beautiful spot be a cheerful experience?

Fact du jour: My body is not pleased with me. The muscles aren't sore, but I'm feeling tired. Worn out. The body is starting to complain. A twenty minute run today, and it's outdoors. For some reason, I hate running outdoors during daylight. I have no idea why.

Last time, I went running by the library, where there's an extensive series of walking trails surrounded by beautiful lakes and grounds. It was early in the day, so there wasn't anyone around to see me huffing and puffing and glowing red. (I don't count that flock of Canadian Geese, who were extremely impolite and Not the sort of bird I would consider a civilized acquaintance.) And I was miserable the whole time. 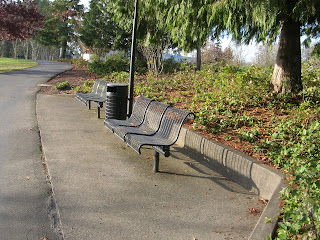 Oh, Merry... come here for a minute...
I've lost at least six pounds this month. Right now it doesn't feel worth it. Damn I hope this is a transitory mood swing. I blame the planets being out of alignment. Where's a cosmic chiropractor when you need one?

Giveaway du jour: I'm heading in to the garage again. I'm starting to see a patch of floor. And I'm sure there are more things lurking there that I could give on to someone who'll appreciate them. I refuse to let that garage beat me!
On the other hand, maybe I'll attack it another day. The sun is out, the sky is blue. I'm getting rid of another book and taking up the rake to do Good Things outside while I can.

Update: Well, Dr. T suggested postponing the run, and one should always listen to a doctor. (Yes, I know the degree is a Ph.D rather than an M.D., but that's not important right now.)

Plus, the roads are icy; there have been several accidents this morning. (A couple hours ago, before the temp went above freezing, but let's not get distracted by side issues like that.)

Plus, I just stepped on a piece of glass and cut my foot. (Hey, it needed a band-aid. Don't want gangrene to set it.)

I swear to Bob, those damn planets are plotting against me.

I did the Pilates Beginning Mat Workout instead.

Maybe you need couple days for a break from exercising, guilt free? You've been working out sooo consistently! I think the body and mind get tired from just the discipline of keeping at it (especially, if you're like me, and discipline is hard to come by). Try taking Tanji for a nice long stroll for a couple days in row. Maybe that will make the trails seem more appealing.

I'm the wrong person to ask if you want enthusiasm for running. Concentrate on doing *something*, such as Theresa's suggested long walk with Tanji.

she who can't decide whether to prance or to dance pances.

And congrats on the six pounds -- that's awesome!

Good choice to do something else instead!

I think being flexible is keep to keeping at it. Especially when you've got Evil Scheming Planets lined up against you.

I conquer with the sentiments above.

Good on you for changing it up. Always good to keep things from getting stale.

I think it's these daily blog posts. I made it through just over a week of that before I wanted to commit violent acts upon whoever or whatever was handy and decided to hell with it.

That and the planets, of course.

waxem: no idea. though the last half of it looks like an upside down mirror image of the first half. damn planets.