Three choices. I can either:

a) Tackle the jungle of weeds in the front yard. 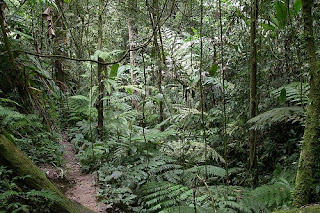 Actually, this looks much nicer than my front yard
b) Sit on the front porch, sip lemonade, and watch the blue angels flying in formation overhead with pink and blue whatsits streaming out of their back ends. (I can almost see my father the ex-pilot shaking his head at my technical terminology.) 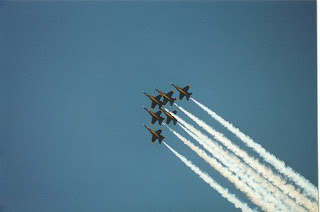 I couldn't quite catch them (they move too fast) so this photo is from flickr.
c) Sit indoors and blog about being indecisive.
Should I be indecisive? Or not? I can't tell.

I suppose they both could be bi-polar.

Note to self: maybe hold off on introducing myself to their parents.

Resolution of the week
Tomorrow I'm going to use the bicycle instead of the evilSUV. I've found that I can control the effects of the coughing spells with ibuprofen, so it is probably the result of some sort of inflammation issue. (On a coughing day, I start coughing a little bit, then cough some more, then end up coughing quite a lot, until my ribs feel tired and it feels like the area around my lungs is swollen. Yes, maybe I should see the doctor, but it's getting better, so maybe I'll hold off and see if it goes away. I hate trying to describe symptoms that come and go.)
Posted by The Merry at 8/10/2008 05:27:00 PM

That bipolar teasing is too funny. Kids have come a long way from the "you're a retard" days. Much better diagnostic skills, apparently.

And, um, speaking of diagnoses... yeah, I'd say a doctor's visit is in order. Swollen lungs and chronic coughing doesn't sound like something to mess around with.

Dr. appt ... do it. You don't want permanent damage because you were too wussy to go see the doctor. Lungs are important. Take care of them. Don't hold off.

Don't make me smack you.

Your post makes me miss Oregon so much! I'm back in TX after seven years in Ashland (sigh).

This past cracked me up because, when I worked in Oregon, I had the World's Best Publishing Mistake on my bulletin board: a page from the Land's End catalog describing a reversible PolarFleece number called the "Bi-Polar Vest" Needless to say, it was renamed in the next edition!

Good luck from a fellow "vertically challenged, horizontally enhanced woman." I'll be following your progress as I begin my quest to regain some semblance of my premenopausal self!